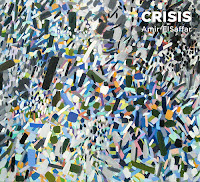 This incredibly beautiful album shows the crisis of the Arab world in all its internal and external conflicts, the strife between modernity and traditionalism, between the right for self-determination and foreign influence, between tolerance and extremism, between peace and war.

We have heard the Two Rivers band before, a title referring to the Tigris and Euphrates in Iraq, rivers of myths and legends, the basis of our civilization, but also very much on our television screens these years, where the cultural remnants of this civilization are turned to ruins. The band are Amir ElSaffar, of Iraqi origin on vocals and quarter-tone trumpet, Tareq Abboushi on buzuq, Zafer Tawil on oud and percussion, Ole Mathisen on microtonal sax, Carlo DeRosa on bass, and Nasheet Waits on drums.

The band already delivered the beautiful "Two Rivers" in 2007 and "Inana" in 2011, two albums that are easy to recommend, but I have the impression that this one is even better. The themes are beautiful, the rhythms complex and ever changing, the interplay excellent, and the emotional depth even better than before. Just listen to ElSaffar's solo trumpet on "Taqsim Saba", a performance which can compete with Nassim Maalouf's "Improvisations Orientales", one of the absolute masterpieces of the quarter-tone trumpet, because of its desolation and beauty. Then listen to the complex harmonies and arrangements of tracks like "The Great Dictator" or "Tipping Point", where you are treated to some phenomenal interplay and dazzling soloing. The only downside on the album is that the strings are not always mixed with the right volume, so they tend to disappear in the background when soloing, but that is really the only downside of this great album. A special kudo too for ElSaffar's singing, which is as sad as it is powerful, not in the sense of Dhafer Youssef's volume pyrotechnics, but more contained, more intimate.

Over the years, ElSaffar has improved on all different aspects of the music, and it was already great to start with. World jazz fans should not miss this, and many others will surely enjoy this.