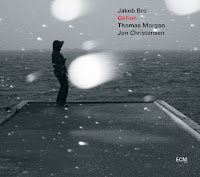 It was a recent Friday, at the tail end of a long week, and I was making my daily slog to the train. I needed to listen to something  that could ease me into the day. So scrolling through my iPod, I hit upon Danish guitarist Jakob Bro's Gefion. It was an album that had been on my short list for a long time, and the time seemed right...

This early 2015 release begins like rowboat trip across a shimmering clear lake of sound. Subtle ripples breaking the surface as bassist Thomas Morgan and drummer Jon Christensen help to power the vessel, but the overall atmosphere is unbroken and refreshingly uncomplicated.

That is not to say the music is in anyway stationary, rather Bro is a melodic player who works in textures and implications. While the opening title track begins with a moody quietness and proceeds along only with the gentle lap of waves against the bow, there is quickening of the pulse as the boat draws into deeper water. ‘Copenhagen', the next track, finds Morgan’s articulated bass work front and center, complimenting Bro's gentle swelling arpeggios. Next, 'And They all Came Marching Out' begins in a more forceful manner and how the guitarist builds off of the looping bass line reminds me a bit of the Bill Frisell's 'Gone, Just Like a Train’. Though the songs were growing more emphatic, the lineage of musical texture was still cohesive, the water has just become a little rougher and the rowing stronger.

The other tracks of the album are too of a piece, whether it is the fraught 'White', or the open ended 'Ending', Bro's work with Lee Konitz, Paul Motion, Kenny Wheeler, and Frisell (just to name a few), has certainly become an anchor for his own poetic work.

My journey with Gefion left me in much better mood. Give this one a listen.