Frantz Loriot - Reflections On An Introspective Path (Neither Nor, 2015) **** 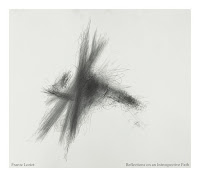 I have written very positively before about French-Japanese viola-player Frantz Loriot, often because of the unexpected nature of his music, and his unwillingness to compromise, which in his case, because of his strong musical vision, is a good thing.

This album is a solo viola album, a very rare happening by itself, but Loriot's music will make it even rarer. The first track consists of multiple strings played at the same time, in an ever increasing move upwards on the  tonal scale, which by itself would not be unique, but then listen to the gut-wrenching intensity with which it is done, and this physicality of strings, bow, wood and sound is essential to fully appreciate Loriot's approach. The second track brings almost flute-like sounds, very quiet and introspective, to evolve to almost aggressive staccato sounds on the third, which gradually change into the sound of a hand saw going through wood without compassion, then slowing it down until you hear the instrument itself moan and the strings rebel against the treatment they get. This may sound harsh, but it's not judgmental, it's as if Loriot humanises his instrument, making it utter sounds for a variety of reasons, yet despite or because of the abstract level of the music itself, a deeper, emotional level is unveiled and even unleashed, primarily because of the intensity of the approach and the overall dynamics of the sound.

And that brings us to the album's title : you could expect an album called "Reflections On An Introspective Path" to be meditative, contemplative, sentimental or even mellow, but here it's the exact opposite. Whatever Loriot finds in his "introspective path" is not always something to be content with, it's a harsh reality that is not possible to catch with words, a laying bare of his soul, and one that screams to be let out.