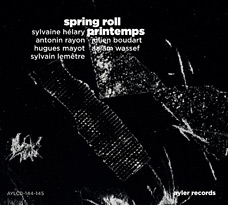 
It may be difficult to make a better introduction to this album than Stephane Berland does in his press notes to this quite spectacular release:

"First created in 2011 at l'Atelier du Plateau in Paris, the concert/performance "Printemps" offered audiences a hybrid between theatre, music, sound poetry and political manifesto - for it was focused on the "Arab Spring" in Egypt, among other things - where the intertwined words and voices of Julien Boudart, Xavier Papies and Egyptian blogger Aalam Wassef created a reflection on the magic of the (new) beginnings."

This double CD album is another strong offering from the Ayler label, and this time presents us with an amalgam of modern jazz mixed with quasi contemporary classical music. This highly sophisticated music blends improvised sections which flow quite effortlessly with written instrumental passages and recited texts. The main group is made up of a quartet (see below), giving the music a chamber-jazz quality. Having said that the ensemble is in no way a polite tea-dance group, they really attack the complex music with amazing precision and energy.

Printemps (CD1) has the main bulk of the texts. These are concentrated (when read) into a couple of the pieces. The texts follow the first 15 letters of the Arabic alphabet - read out before each short passage. The music is precisely composed around these vocal interludes, the detailed interplay between the spoken text and the music is mind boggling. The instrumental sections are sort of bridges between these piece, however there are plenty of extended writing in these also. Although there are solos, much of the music on Printemps I would guess is composed. However the marvellous writing (composition/orchestration) carry you along in a way that made me think of Stravinsky's L'Histoire de Soldat.

The second CD Spring Roll is a shorter affair. It has a wonderful opening duet (tenor sax/flute) sounding not unlike Warne Marsh and Lee Konitz*. The main bulk of Spring Roll is instrumental, although there are some vocal interludes, some of them sung (Île, tk5). Although the music is very complex there are in this piece moments where soloists get a chance to improvise, often whilst the ensemble supports them. In track 3 there's two wonderful sections, one featuring the piano, the other another improvised duet, but this time between piano and tenor sax. Overall Spring Roll certainly gives much space to the individual instruments. Bruissements du monde gives us a chance to hear Sylvaine Hilary alone - playing a wonderful extended solo flute introduction. L'esquive (tk6) has a nice blend of synths, percussion & piano accompanying a fiery sax solo. The track then passes via some complex contrapuntal writing before settling down before leading into a narrated passage in German (Jean Chaize).

This is a highly recommended album, and certainly 5 stars if ever there was one. The work and detail put into these two compositions is quite spectacular, and if you like contemporary jazz meets classical you'll find a lot of very interesting music here, and I would add there's most definitely "never a dull moment".

Translations and transcriptions of the texts (original French texts and English translations) can be found on the Ayler website.

* = Lee Konitz being an alto player, not a flautist.