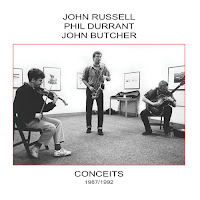 This is a reissue of the first album by the improvising trio of John Russell (acoustic plectrum guitar), Phil Durrant (violin and trombone) and John Butcher (tenor and soprano saxophones).  Originally released in 1988, launching the Acta label and sporting a Jamie Muir (the percussionist in Music Improvisation Company and later of King Crimson fame) painting on it’s LP cover it has become almost impossible to obtain in recent years; that is until now.  For the first time on CD Emanem have now released this lost classic so that it can be heard by those of us interested in hearing this excellent trio’s first recordings.

The first eleven tracks that were recorded in 1987 and appeared on the original LP release have been augmented on this reissue by a previously unreleased live recording of the trio made in Stockholm by Mats Gustafsson, which dates from a few years later in 1992.  The original album tracks are relatively short lasting between two to six minutes in length.  The additional track is longer in length coming in at around sixteen minutes.

The album starts with the now aptly titled “How It Was”, Butcher’s saxophone playing a quick motive which rests on a long sustained tone whilst Russell’s guitar and Durrant’s trombone provide a pointillistic accompaniment and the perfect contrast.  The style of the music is typical of the classic sound of British free improvisation from around this time and contains obvious parallels and influences from earlier groups such as Spontaneous Music Ensemble and Iskra 1903.  Containing a wealth of fragmentary motives that call back and forth to one another, sharp contrasting textures, extended instrumental techniques that produce other worldly sounds and defy instrumentation categorisation, the music is delivered in a very dry and clinical way with expert interplay.  The three musicians blend their individual sounds with an ease that belies the complexity of the textures that they produce and at other times the instruments are deliberately separate and isolated within a collage type form.

There are some interesting titles to the tracks such as “Fine Sharp And Leighton Buzzard” and “From The Eggs To The Apples”.  The bonus track “Soft Hours And Solidities” sits naturally at the end and is of a similar style to the other material, so much so that it’s hard to imagine the album not originally containing it.

Whether it’s a favourable opinion of their own ability, a flight of imaginative fancy or a purely elaborate and decorative article, the Conceits on offer here are once again welcome to be readily available to us all.