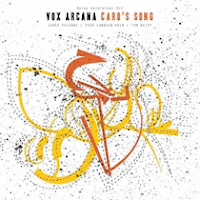 Let's just get this out of the way.  Chicago drummer/composer Tim Daisy is getting his second 5-star review from me in 2015.  I don't want to give it to him – because it just plain looks bad, like I'm on the Relay payroll or something.  But Caro's Song is simply that goddamn good.  What follows is a review-length justification of my guilt.

Daisy's ensemble writing here draws heavily on the mid-70s Anthony Braxton model for quartet, which I believe is as fine and sturdy as the more popular late-50s/early-60s Ornette Coleman Quartet model (which was so successfully utilized by fellow Chicagoan Keefe Jackson on Seeing You See back in 2010).  It typically involves a fast statement of the theme, followed by a variation, then a (usually looser) re-statement of the theme, then a loose improvisation on top of a skeletal structure.  This is just the jumping-off point for Daisy, as he bends and folds the blueprint to serve the needs of this trio, which also features Fred Lonberg-Holm (cello, electronics) and James Falzone (bass clarinet).  This is the group's fourth recording.

“Assembly” opens the disc with Daisy on marimba; and the group immediately calls to mind Jimmy Giuffre's late 50s trio recordings, as Daisy himself acknowledges in the liner notes.  The collective improvisation near the end of the track sets a standard that would be difficult for any band to maintain; but Vox Arcana is simply laying the foundation for the rest of the disc.  The title track follows, utilizing the 70s Arista Braxton composition model for the first time.  Lonberg-Holm does quite well in the Dave Holland role, alternately scraping-&-sawing and plucking the groove (when one surfaces) with fine precision.  The song ends with a compositional surprise: a Braxton-esque loop starting and stopping, fading out to the end.

This music is spacious, open, and warm – even when abruptly changing gears.  The musicians employ a confident approach that reflects the amount of experience they have with each other.  “Silver Light” is a perfect example, opening with long quiet notes on clarinet and cello, as beautiful as a Morton Feldman piece.  When Lonberg-Holm and Falzone play long notes over a Daisy's busy (but relaxed!) marimba in perfect counterpoint, the sublime becomes transcendent.  There is a hilarious perversion of the Braxton composition model at the beginning of “Objects,” that involves tweaks in the time/space continuum.  Daisy seems to be dangling Fred and James from strings, forcing them in different directions and then suddenly bringing them back together solely through the intuitive will of his drumming.  “Contained” demonstrates even more clearly that this group can play as one six-armed machine, with brilliant unhurried statements made by all, collectively and individually.

The disc concludes with “The Mad Dance,” which begins with Daisy playing a semi-Latin beat which is answered by Fred and James.  Then Daisy replies.  Then the response.  Then faster.  Then higher.  Daisy switches to marimba, pounding out one note repeatedly before finally extending into free runs that actually appear to alternately extend and cut time.  It's a trick that wouldn't work without the exercise that preceded it, but knowing this does not ruin the effect at all.  He settles on a tempo and Falzone enters, playing a solemn melody over Daisy's arpeggios.  Then enter Lonberg-Holm, plucking one bass note while Daisy flips on a radio.  Static and a lone unintelligible voice accompany briefly while Daisy moves to the drum set.  He slowly pounds out four-on-the-floor with bass drum, ride cymbal and snare in unison with Fred's bass note, building tension like the V.U. or Godspeed.  Yes, this eventually hits the sky – but then it abruptly stops on a dime leaving only Falzone's clarinet softly landing us all on the ground.  Incredible.  I'll be amazed if a more solid album appears before the year's end.  If it does happen, and if it's on Relay, I'm not writing that review!  No one would believe me.

Good review. It's a great album and it's always nice to hear tuned percussion in free jazz/improv. It's not that common and seems to add an extra dimension.

Indeed a very nice, mouth-watering review. I haven't heard the album so far but I will definitely check it out. Daisy is a great drummer who has been getting better and better with his latest collaborations.

Mark said....
always pleased to see a new Vox Arcana album. Not surprised that it's good, the others have been too

Thanks guys! Colin, I saw the Daisy/Levin duo on Friday night & Tim down-tuned the floor tom for the last third (approximately) of the set. His recent use of radios also adds an extra sonic dimension + somewhat-controlled-randomness to the overall music. Agreed Martin, he's on fire right now.

Just back from the Jackson Pollock exhibition at Tate Liverpool. Recommended.

The Daisy/Levin duo sounds good. I've been trying to get hold of their "The Flower And The Bear" which was released as a limited edition CDr, but so far as I can tell from Bandcamp, it's not available as a separate digital download (but as always, I could be wrong):

By the way, the Caro of the title to the album is the sculptor, Anthony Caro. A major retrospective of his work is now taking place at the Hepworth, Wakefield, and the Yorkshire Sculpture Park, which I hope to get over to see in the next week or so.

There's also a Henry Moore exhibition at YSP at the moment, with many of the interior works drawn from his daughter's collection. Outside, are some of his large bronzes, which you can stroke. All great sculpture makes one want to touch it,. I saw the Moore exhibition a few months ago, but when combined with Caro you are in for a treat.

Colin, you should email Relay directly from the Contact link on their Bandcamp page. Tim had hard copies of "The Flower & The Bear" on the merch table in Bloomington, IN this weekend. (Maybe they were Levin's sale copies?)

Have you seen the permanent Henry Moore collection in Toronto? If not, HIGHLY recommended! Thanks for the Caro link.

Thanks, I might try that, although Tim might want to think about providing a download on Bandcamp, as he's done with other albums on the label. I'd prefer that, as I'd only rip the CD to hard disc if I bought it. Apart from vinyl, that's my preferred method nowadays.

Sadly, I've not been to Toronto (even though I am, strictly speaking, half-Canadian). There are Moores scattered all over the world - ditto Barbara Hepworth, the subject of a major retrospective that's just opened at Tate Britain in London. I saw the Moore retrospective at Tate Britain a few years ago, and I wanted to caress the utterly gorgeous wooden sculptures in the final room. For obvious reasons, this wasn't allowed, but I was sorely tempted.

Seems I may need to make a special trip to the UK to see the Caro exhibition. And Henry Moore as well?! Wow. That's inspiring. Two of the great masters of sculpture, each one radically different in approaches and aesthtetic.

My plan is to offer the Flower and the Bear as a digital download. I will get this together very soon. Feel free to check out the Relay Bandcamp page in the next couple of days and I should have it available to stream and download.

Thanks for your support.

My best from Chicago!

Thanks Tim, I'll look out for that.

Agreed: two modern masters, and you could stop off in London to see the Hepworth exhibition to make it a trio of great sculptors.

And to revert to my original post, and tuned percussion: I'm listening to the Nate Wooley Quintet's "(Put Your) Hands Together" (Clean Feed, 2011) with Matt Moran on vibes. What a terrific album.

Matt Moran is a fantastic musician. I heard him in Wels, Austria a little while back with Mr. Wooley.

Daisy is a good guy and a fantastic musician. His drumming has always been very melodic but adding the marimbas here just ups the ante. Outstanding release; probably the best I've heard this year. I don't think I've ever appreciated Falzone more than in this setting