I think the only musician I've ever qualified as a 'genius' is Rob Mazurek, no doubt an exaggeration generated by the adrenaline secreted by my body as a biochemical reaction from listening to his music, but an adjective worth keeping. Why? Because he does many, many things, with totally different approaches, all with a unique voice and strong results. Starting his early career with mainstream jazz albums, the cornetist soon created the Chicago Underground Duo/Trio/Quartet, moving into novel territory with a wonderful mix of jazzy compositions that are either simple and introspective, or extraverted and jubilant. And that dichotomy is present is most of Mazurek's music. His more intraverted side led to his solo albums ('Abstractions On Robert D'Arbrise', 'Episodes'...) which are by themselves either relatively straightforward although with a unique sound, full of authentic emotions, or experimental, such as 'Silver Spine' (which includes a lot of under-water cornet playing).

But then there is the influence and the collaboration with rock bands such as Tortoise, HiM, Tigersmilk, Mandarin Movie and Isotope 217, all mixes between gentle post-rock, instrumental rock and electronic out-there rock, music which is characterized by inventiveness and rhythmic fun. Then he opens his horizon even broader by moving to Brasil and integrating ambient and techno and electronics and the São Paulo Underground is born, music that is a great mixture of jazz with all sorts of influences and very electronic, layering sounds on top of one another. Next to that you have special projects, like his "Mother Ode", "Calma Gente" and "Skull Session", all albums that come highly recommended and with different musical approaches and bands, and please, keep browsing through our website to find more little gems.

In all these surprising and unpredictable bifurcations in his musical career, a number of things are worth mentioning. First, Mazurek creates his own voice in all these different genres, or even stronger, he creates all these different subgenres where a normal musician would already be happy to have developed just one. Second, he has a formidable talent for great and beautiful themes, often joyous and jubilant, reinforced by his lyrical cornet playing. Third, his compositions and improvisations are always full of a monstrous sense of rhythmic drive, not eschewing complexities. Fourth, he is open to any influence, which he manages to integrate in his own musical vision without compromising to commercial sensitivities.

All these come together in his Exploding Star Orchestra, a larger and very ambitious band, which celebrates its 10 anniversary this year, and which has received my highest praise over the past years and which is easy to recommend.

Please check Rob Mazurek's name in the search box on the right for his all albums we reviewed. You will find an incomplete list of his albums on his own website.

Today, Mazurek turns 50, and we thought it would be a good idea to give him and his music some special attention. 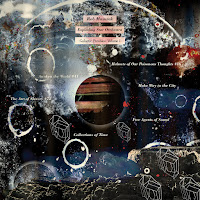 Each time a new "Exploding Star Orchestra" album is announced, I just can't wait to listen to it, because of all the moments of musical joy the previous albums offered me, and expectations run high. Their first album "We Are All From Somewhere Else" I called 'a masterpiece', which I have not often done, and some of the other albums also received 5-star ratings.

This album is even more ambitious : a 2 CD album or a limited edition 3-LP vinyl album.

The first CD is recorded live at the Sant' Anna Aresi Jazz Festival in Sardegna, Italy and the second CD comes with the same material, but performed some months later in Chicago, Illinois, United States.

The band on the first CD are Rob Mazurek on cornet and electronics, Damon Locks on voice, Angelica Sanchez on piano, Jeff Parker on guitar,  John Herndon and Chad Taylor on drums, Matt Bauder on tenor saxophone and clarinet, Matt Lux on bass guitar, Guilherme Granado on keyboards, samplers, synth, voice and Mauricio Takara on cavaquinho, electronics, and percussion.

The Chicago concert is the same band with Nicole Mitchell added on flutes, but the Brasilians Granado and Takara, together with Chad Taylor on drums are not present.

It's interesting to listen to both albums because the core material is identical but the performances are completely different, not only in length, but also in quality and sound, offering a good idea of the influence of improvisation on composed material, and of course of the line-up itself.

As the title suggests, the album is about a Sun Ra kind of space travel. Like the band's other albums, the music is expansive, extravert, exuberant. At the same time, and as on the band's latest albums, spoken word is added, and I must say that I have a kind of allergic reaction to 'spoken word' in jazz, because somehow it mimics church sermons both in content and in style of declamation, and on this album it is even worse. Damon Locks' texts and his delivery are pompous, bombastic, pontifical, grandiloquent, affected and portentous, sounding like a preacher or a prophet more than some space traveller, but maybe that's the intention, and it would somehow fit with the music's natural inclination for complexity and bombast, but not its subtlety. Luckily, the "spoken word" part is fairly limited, so my church allergy quickly disappears, and my ears are open again to the music.

The music is - in contrast to many of the previous albums - quite light, in the sense that the natural density and darkness have almost completely disappeared. The texture is more open, less compact, with more space for soloing, moving the overall sound more towards a jazzy jam session rather than the tightly orchestrated complex interactions of the full band and moving away from the heavily altered electronic sound of the studio albums. The music flows nicely, and is even quite welcoming in tone, with lots of mid-tempo arrangements.

The presence of a piano makes a big difference to the overall sound, replacing the typical percussive vibes sound of Jason Adasiewicz with a more liquid sensitivity. And all instruments get their moment to solo, nicely, with good space for Sanchez, for Parker, for Bauder, for Mitchell and for Mazurek himself, making the overall tone less monolithic than the previous albums. Some of the themes are grand and compelling, with moments of rare beauty, even of quiet and contemplative spaces, in stark contrast to some of the hyperkinetic nervousness and agitation on the other albums. Fans of the Exploding Star Orchestra could wonder where all the built-up tension is, where the menacing undercurrent of doom has gone too, where the powerfully orchestrated chaos is, why the magnificent drive of the juggernaut has slowed down, why the orchestral waves of sound have flattened? Fans might think this is a watered-down version of the Exploding Star Orchestra, and maybe their travels have led them to other places in the galaxy that are more welcoming, more open to mainstream listeners, offering a less inhospitable and more compromising sonic universe.

In sum, a highly enjoyable album, with great themes and good playing, yet I can only hope their Galactic Parables Volume 2 will bring them again in uncharted territories where the unknown creates a sense of dread and forces the band to move as one.

I think this is a really exceptional album. It's true that the density of the music has decreased and that it's all in a more positive tone but I don't see why this has to be something negative.
The collective shines and the soloing is nothing less than sublime. Also, the contrast between the two performances gives a great insight in the way this ensemble works.

Absolutely agree with your "from the pulpit" observation. I always feel like I'm being lectured to, which puts me right off. The fact that it's usually third-rate poetry doesn't help.