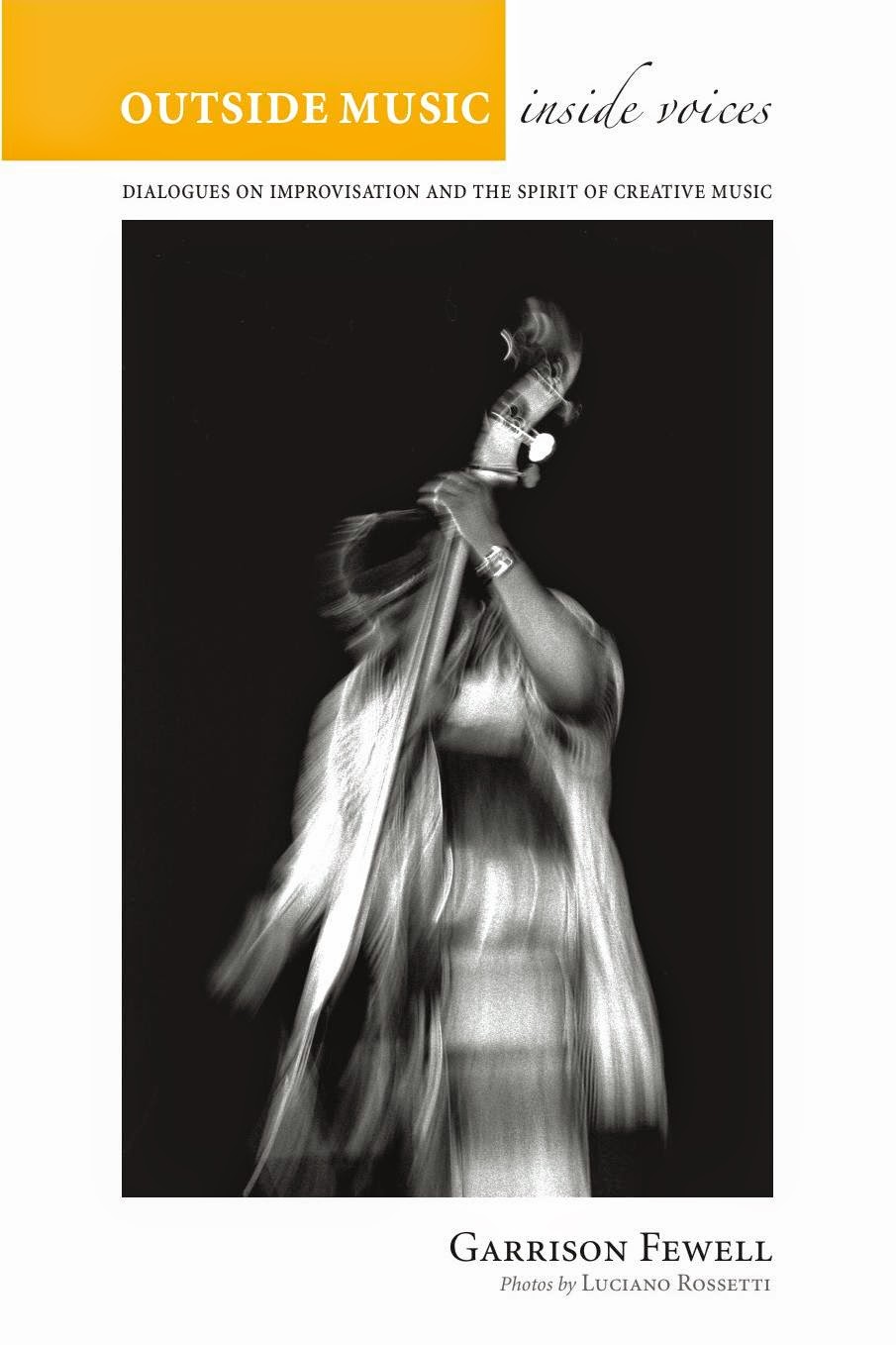 Some months ago, Garrison Fewell sent me the manuscript for his book, asking whether I could write a review of it, something which was in early stages of development, yet unfortunately reality was faster and Garrison Fewell has left us yesterday. So, in memory of Garrison, here is a review of his book, which is quite exceptional.

As Ed Hazell writes in the Foreword : 'It’s a book of musician-to-musician dialogues focused (mainly) on a single topic—the ways in which spiritual values inform the lives and art of improvisers".

And that captures the topic well. Garrison Fewell approached a number of musicians that he valued and that he has played with to ask them about the spiritual side of their music or of music in general.

The interviewed artists are John Tchicai, Dave Burrell, Wadada Leo Smith, Henry Grimes, Joëlle Léandre, William Parker, Oliver Lake, Milford Graves, Marilyn Crispell, Henry Threadgill, Steve Swell, Roy Campbell Jr., Han Bennink, Joe McPhee, Matthew Shipp, Nicole Mitchell, Myra Melford, Pheeroan AkLaaf, Baikida Carroll, Ahmed Abdullah, Rosi Hertlein, Irene Schweizer, Liberty Ellman, Steve Dalachinsky, Sabir Mateen. So, quite a list of artists with a strong experience in improvised music, and interestingly enough many of them also practice some sort of yoga, meditation or buddhism, and whether or not that influenced Fewell's selection, I do not know, but in any case it does not come across as such, so I assume that they were selected based on their musical track record first and foremost.

I think it is typical for Fewell's approach to music to make things happen without taking the center stage. He asks the same questions to each of these musicians, and interjects some additional ones during the conversations, and like with his bands, he coaches these artists to give their response : they actually write the book. Like in his music, Fewell is more interested in what his band members can come up with, than with his own playing. He himself was very spiritual, meditating daily and an adherent of 'Nichiren' buddhism.

His spiritualism guided him to look at "a realm beyond what we perceive through our physical senses or reasoning, and often describes a process of inner development, a seeking to discover and strengthen the essence of one's being. Improvisation is a way of life that involves all the senses and requires a total surrender to the moment".

The book is absolutely excellent. Because of its interview style, it reads very easily, in a very colloquial manner, but Fewell is a good interviewer, pointing the interviewees in the right direction. You get of course many different viewpoints, which is of interest by itself, on the nature of "spirituality" and on the role of spirituality in music. And third, you learn a lot about these artists' approach to music, they tell you little anecdotes to make the reading more attractive.

I will not spoil the fun by repeating too many of those quotes and stories, but just to give you a general appetite, here are some examples.

Steve Swell : "First when I played the trombone in fourth grade, I was ten years old and I had a good music teacher who took ten of us, and he played the Batman theme and said : "When you get to the part where you shout 'Batman!', play whatever you want for eight beats", and then he would come back in with the theme again. We didn't know we were improvising. I didn't know what I was doing, I was just feeling it. I had the trombone and I was making whatever sounds that came out, not knowing what I was doing, but just doing it without thinking about it, trusting whatever was inside of me. The earlier kids get to do this, getting them to improvise without explaining it all, just having them implant that seed and permission of personal creativity and make it a very natural thing instead of it being the sometimes painful and unnatural experience it has become".

Roscoe Mithcell : "I think it's important that students be exposed to improvisation beyond traditional jazz concepts. You never know what will be their path, so they should have the option to be aware of many possibilities. Learning creative music helps them to expand their ear to contemporary aesthetics and to listen outside of traditional harmony and rhythmical ideas. It allows them to develop the expression of texture, energy, and to develop listening skills and cooperation with others".

Han Bennink : "When I was very young, I always had two disciplines—drawing and playing drums. My father was a professional player. I actually don’t know anything different or better since I was fourteen years old. Of course I was more interested in music from that time, like hard bop and that sort of stuff, but I developed to where I am now and that’s the result of it [the art and music]. If that’s spiritual, or whatever it is, I don’t know. I can’t answer those questions because I play music. Or I hope to play music, and I hope that every night will be a nice forum, and I hope that everyone will be on his best and working on that. But for me, giving it that label, it’s a bit too heavy. I’m not a label person. I like to jump from one box into another box and be, in the good sense of the word, a bit “taste-less” or give it my own taste. It’s like making collages—I make collages from pieces of things I find around me, objets trouvés— and that is how my playing is also. It’s sometimes a bit of this and a bit of that, which you can definitely hear. I’m not a person to use those heavy words. I hope it will be music and I train like crazy.

Joe McPhee - Well, when you mention “spirit,” I think of that not so much in a religious context but more like the center, the soul of the music. Where it comes from, I don’t know. I haven’t found it yet—it’s somewhere around there. The “spirit” is a kind of a force that is the center of what drives the music, where it comes from, the source of it. I don’t think of it so much in a religious sense.

I saw John Coltrane Live, I think it was 1962 at the Village Gate, and it shook me to my absolute core. First McCoy [Tyner], Elvin [Jones], and Jimmy Garrison came on, and I kind of think of it like being in an airplane, a jet plane going down the runway, and just where it starts to take off and you feel that kind of lift—that’s what happened when John Coltrane came on the stage. I couldn’t get any air in, I couldn’t breathe, I thought I was going to die at that time, I couldn’t move. And Albert’s music did that to me as well. The reason I play the tenor saxophone was the sound of Albert’s tenor. Coltrane’s sound, of course, was there too, but Albert’s sound grabbed me in such a way I said, “I want to try this.” And that’s why I play the tenor saxophone to this day".

Matthew Shipp : "Well, how I define spirituality is that obviously, if we exist, or anybody
exists, there’s some animating force that allows you to exist. So, spirituality to me is reverence to whatever that animating force is, however you define it or whatever you call it. That’s what spirituality is to me. You can take away all the religious connotations from that and just use the word “generating force” or think of it in those terms. My assumption is that consciousness is all, and anything can be geared down to consciousness"

Marilyn Crispell -"I think a lot of organized religion doesn’t have anything to do with spirituality. It’s very difficult to put into words. For me, it’s just about trying to be in a place where I’m able to get out of the way and allow myself to connect with some kind of universal energy, to be in the flow. I’ve heard it called “being in the flow.” It’s about pure, creative energy. You could even say it’s about love. Cecil Taylor says it’s about magic, and it’s about love, however you want to define that."


Joëlle Léandre " When we play, and definitely when we improvise, we become the other one. This is the reality when we improvise because everything is open. We are at the same time performer, improviser, and composer of vibration. To communicate with the other one you have to look at the other, to go inside them and to become, a little bit, the other one. Improvisation is the only expression where tomorrow you could fly to Tibet, Africa, Mexico or anywhere to play and improvise with others, because to improvise is to be open to everyone, and everything and ever sense - to open and to say "hey, who are you? Let's do something together. Let's play!". This is what it means to improvise.

I started music when I was very young—less than nine years old. We slowly discover so many different things, like art, and we practice our instruments a lot. But it doesn’t mean you are a musician just because you practice your instrument. Being a musician is life, it’s daily life, every day. Intensity is not only sound. You go into the street and you embrace life. It’s a long process. So we learn, we learn. There’s a moment, though, where we have to unlearn. And nobody gives you the key".

Baikida Carroll - (about Julius Hemphill's Dogon AD) : "The percussionist Mor Thiam and his brother Zak objected aesthetically to the 11/16 rhythm of the piece, so Julius cancelled their participation. I'm not really sure what happened to John Hick's part, but when Julius returned with the finished score, it had been reduced to a quartet. The four of us worked on the music relentlessly, especially Julius and I. Wadud came in from New Jersey, so he was there a week or so prior to the recording date. He didn't seem to have a problem with the piece, given that his reading chops were impeccable. The 11/16 presented a particularly gnarly problem for us all. It's not a piece you can just lay in the cut and drop in your part. You have to be extremely attentive to tempo, rhythm and groove without sounding academic. The basic groupings of the 16ths being 4-4-3 implied a 3/4 metrical scheme with a missing 16th which created a tendency to rush the tempo. I watched Philip's frustration and determination as he gradually transformed this complex jazz approach to a more favorable laid-back gutbucket groove. After days of intense rehearsals, oblique anthropological discussions, and attempts to formulate and incorporate personal methodology to Julius's brilliant concept, we emerged (in my opinion) mask-bearing, language-encoding country preachers, dancing and testifying to a phantom totem somewhere in the Bandiagara Escarpment in Mali".


Some examples to give you a kind of flavour and an idea of the value any reader might get from this book, whether musician, educator, or interested listener, you will get insights into the process of music, in the lives of artists and in understanding what is happening on stage or in albums.

In sum, a very valuable and easy to read book with many of today's most adventurous musicians.

We will all miss Garrison and his music. We can only thank him to have written and published this book so that we can all enjoy it.