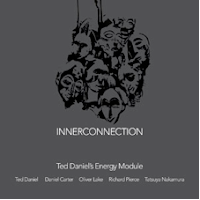 When there someday is a final evaluation of the loft jazz scene, the role of Danas Mikailionis and Valerij Anosov of the Lithuanian NoBusiness label will surely be appreciated. On the one hand the label has released new and adventurous music by lesser known artists (e.g. Szilard Mezei Tubass Quintet, ROIL or Fabric Trio) or established musicians (Mats Gustafsson, Barry Guy or Nate Wooley – to name just a few). On the other hand they try to discover and release sunken treasures, for example from the aforementioned New York era of the 1970s – like  the Melodic Art-Tet, The Group or William Parker. Their latest effort is a session at Sunrise Studios from November 1975 by Ted Daniel’s short-lived Energy Module, a quintet consisting of Daniel himself (trumpet, flugelhorn, French hunting horn, and Moroccan bugle), Daniel Carter (tenor sax), Oliver Lake (alto and soprano sax, flute, piccolo, and cowbell), Richard Pierce (bass), and Tatsuya Nakamura (drums).

The album opens with the Sunny Murray miniature “Jiblet“, a powerful introduction to the following tracks, which are a mixture of cover versions and Daniel’s own compositions. And there are a lot of characteristics the pieces have in common. “Innerconnection“ by Dewey Redman and “Congeniality“, an Ornette Coleman tune, live from the excellent horn interaction: tightly intervowen ferocious runs, polyphonic mayhem, the opposition of the saxes crying and honking and the trumpet’s smooth and elegant tone.

The highlight of the album is the band’s version of Albert Ayler’s “Ghosts”. In contrast to the original, the band hides the theme behind collective improvisation, only here and there it shines through. In the beginning it’s the trumpet that tries to establish Ayler’s march-like melody against the saxophones, winning them slowly over. The band emphasizes the tune’s call-and-response and gospel roots and only after five minutes the frontline plays the theme in unison, which makes it stand out all the more powerful, it’s literally swelling in front of Nakamura’s driving rhythms. From then on the horns process the tune in an exciting and powerful way.

Actually, the music on this album is a must-have for fans of classic free jazz. The only weak point is the fact that Pierce’s bass can only be properly heard once the ensemble passages turn down the volume, for example in “The Probe“ (a Ted Daniel composition), where he proves what an imaginative and creative player he is.  His repetitive pulse opens the track, then the complete band presents the main theme, before Lake takes over for a long, reflective alto meditation full of intense dynamics (especially the restrained overtones, the shivering, compressed tones, and the imaginative modulations of the theme are really awesome).

I am really looking forward to the next gem the Lithuanian pearl divers are going to release.
Innerconnections is available on vinyl (as a limited edition of 400) and on CD.

You can buy it from the label and from Instantjazz.