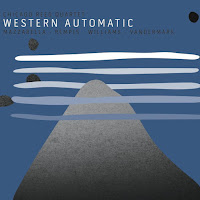 'Burn Unit' is a pulse quickening way to kick off any album. A simple staccato melody is played in unison until it breaks, splintering free, letting musical statements explode with purposeful energy. The piece is a not so gentle introduction to the powerful and musically adventurous Western Automatic by the Chicago Reed Quartet.

Headed by tenor saxophonist Dave Rempis (and released in his excellent Aerophonic label), the Quartet also features the fearless reed work of fellow Chicagoans Ken Vandermark, Mars William and Nick Mazzarella. Quite a line up, and it is a shame that this may be the group's only recording as it captures an intense and engaging group playing with focus and conviction.

And so 'Burn Unit' is a long song - by the time were at the end, the fiery start has become a moody ending, setting the stage for the more traditional jazz harmonies of 'Remnant'. Showcasing a different side to the group, the slow moving melody is damn near romantic in its lushness. The credits for the album's eight tracks are split evenly among the members, each one with its own personality and approach, like for example 'P.O.P', which begins with a dramatically pensive melody that eventually gives way to an effervescing array of musical ideas.

It could be said that good ideas come in pairs, or it's just something blowing in the wind, but Chicago Reed Quartet has a companion in another Chicago artist, James Falzone, whose recent Regna Ensemble was also a striking reed oriented recording. Even sharing a bit of the same cast, both groups provide evidence of the life and vitality of the woodwind ensemble in avant garde music. Highly recommended!