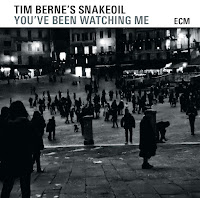 Tim Berne's Snakeoil has already released two excellent albums on ECM. These efforts - the eponymous debut and the follow up Shadow Man were the works of an acoustic quartet and on the new You've Been Watching Me, alto saxophonist Berne expands the group to a quintet and introduces electric elements to the mix, expanding the textures and possibilities of this already virtuosic group.

Electronics are introduced by way of pianist Matt Mitchell, whose new sounds can be heard as the album begins, and by Ryan Ferreira, who comes to Snake Oil with electric guitar and a bag of effects. His distorted textural guitar playing underscores the group work on 'Lost in Reading' and helps take the tune from the slow build to its climax. None of this takes away from the acoustic sounds of Berne's keening alto and Oscar Noriega's bass clarinet as they traverse the intricate arrangements. Percussionist Ches Smith plays a pivotal role as well, and on a track like 'Small World in a Small Town' the absence of his drums is counterbalanced by his judicious use of the vibraphone.

Compared to earlier output, You've Been Watching Me is an evolution in the group's sound and it's interesting to hear how the compositions are growing and changing. Listen to Mitchell's electronics darting about Noriega's rich lines on 'Lost in Reading', or Berne's extensive passage on 'Small World in a Small Town' where the supporting harmonies are quite simple but underpin much complexity. On You've Been Watching Me, with the larger group and more expansive palette of sounds at his disposal, Berne's use of subtleties really comes to the fore.


It tempting to think that Berne has reached his peak with Snake Oil, but then again work from his previous group's like Big Satan and Bloodcount (just to randomly pick two others) were also career highlights, which suggests You've Been Watching Me is most likely just a new high.