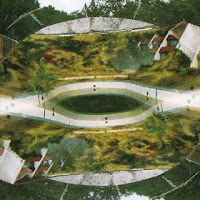 Many Arms are not really the kind of band that needs further musical backing. Given the density of their music, one might even think that the addition of guest musicians might be more of an overload than an enhancement. But such concerns don’t seem to trouble the Philadelphia trio; on the contrary, they seem to have taken a liking to collaborations, as the record to be reviewed here is the second collaborative effort in a row, following last year’s Suspended Definition (with Canadian saxophonist Colin Fisher). And since that record turned out to be a full artistic success, concerns about the quality of the results are probably unfounded here, as well.

And yet, the obvious differences between Fisher and Japanese Noise/”Onkyo” improviser Toshimaru Nakamura don’t allow hasty conclusions as to the artistic merits of the outcome. Fisher’s musical sensibility was certainly more in line with Many Arms’ “too much is barely enough” approach than Nakamura’s. Employing a no-input mixing board, he stands more or less on the opposite end of the improv spectrum, favoring gritty but abstract sounds whereas Many Arms go for a brash, punk-derived approach (think Last Exit or The Blue Humans). In other words, it’s a risky endeavor, and there’s really no way to tell whether this is going to be a case of “extremes meet” before actually considering the music.

In a way, then, the first track here highlights the possible problems of such an unlikely collaboration. While by no means bad, it’s a fairly typical Many Arms track that doesn’t leave a lot of room for Nakamura’s contributions. He provides merely a layer of background noise which almost goes unnoticed next to Millevoi’s dazzling guitar leads. Track two, however, proves to be a better argument for Nakamura’s presence. It’s much more spacious and quiet, thus allowing him to show his strengths. And Nakamura does just that, seizing the opportunity to flood the ether with waves of grainy, textural sounds. It is indeed like a sea of sound, time and again set into motion by bass drum hits. But the true high points are to be found in the record’s second half. It is here that we witness Nakamura’s transition from “guest musician” to “band member”, as his contributions finally go beyond the merely textural. On track three, this somewhat more organic interaction results in what sounds like an unlikely match-up of Black Flag and AMM, as Many Arms’ frenetic playing and Nakamura’s “broad brushstrokes” combine in unexpected but mostly successful ways. The fourth and last track, then, sees the quartet operating as a regular band, with Nakamura engaging in intriguing rhythmic interplay with both guitar and bass.

A strong effort that begs for continuation, since this quartet’s potential seems hardly exhausted by these four tracks.