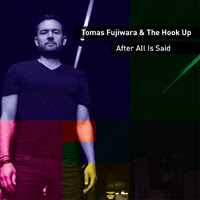 After All Is Said starts with a free falling melodic line from the flute against a syncopated bass and drum rhythm, and some percussive delayed effects from the guitar. Just this small sound sample in itself captures the intent of the album, with the different colours of the varied instrumentation not only taking turns in coming to the fore but providing a rhythmic and multi-coloured backdrop to the proceedings as the music develops throughout. The sax & trumpet of Settles and Finlayson combine well together, at times playing unison lines which are provided a sharp and angular counterpoint by Halvorson’s guitar, which on the track Boaster’s Roast is driven along by Fujiwara’s funky beats.

Fujiwara’s judiciousness continues to be second to none, providing industrious percussive textures one minute, syncopated rhythms another and then knowing when to drop out all together to provide space and more static textures. His arrangements provide a great foil for the soloists, which allows the talents of his band mates to really thrive within the music that sounds dynamic and full of energy. 'For Tom and Gerald' is the shortest track at two minutes and is a Fujiwara drum solo, which is as defined as it is tasteful. He also starts the longest track 'Solar Wind', being joined by Brian Settles for a drum and sax duo before the rest of the group enter with syncopated melodic riffs that eventually stretch out into some freer improvised parts.

The album finishes with 'When', which starts with solo guitar sporting a riff that wouldn’t be amiss off a grunge-rock album. As the others enter the music is transported into a laid back jazz vibe, which breaks off leaving the solo trumpet before returning to close out the album. There’s a real sense of group cohesion on After All Is Said, with its seven tracks, and as a work it sits quite solidly on the ear with some intricate individual parts that blend well within this close-knit unit.