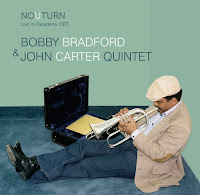 Few musicians have a combined history like cornetist Bobby Bradford and clarinetist John Carter, starting in 1970 with "Seeking", a title which says a lot. It was to be their music, and nobody else's. Highly recommended albums are "Castles Of Ghana", "Dauwhe", "Dance Of The Love Ghosts", and well, several others too.

Carter passed away in 1991, and that put an end to their combined output, but then now we have this wonderful "No U-Turn", a live recording dating from 1975 of a performance in Pasadena, California. The band further consists of Roberto Miranda and Stanley Carter on bass, and William Jeffrey on drums.

The long first track, "Love's Dream" first appeared on the same-titled album from 1974 of Bobby Bradford with John Stevens, Trevor Watts and Kent Carter, as are "She (Woman)", "Coming On", while the last track, "Circle", penned by Carter first appeared on "Secrets" from 1973, and later on "Tandem 1", and it starts with a wonderful duet between cornet and clarinet, after which the band goes back into high energy mode. "Come Softly" is a more meditative piece with a central role for Carter's soprano and I think it is the only original composition on the album. That should not limit the fun, because all tracks are highly enjoyable, and the audience is quite enthusiastic and as much part of the music as the band. Their playing is good as usual, and the themes are either grand, as in "Love's Dream", and "She", or just platforms for free improvisation, as on most of the other tracks. The nature of the music makes it both wildly energetic and messy at times, and after a drum solo and bass solo on "Comin' On", the band has some trouble picking up the pace again, but these are minor comments.

The performance is great, very soulful, with moments of great beauty, and all four musicians give the best of themselves, to great acclaim of a relatively large and very attentive audience.