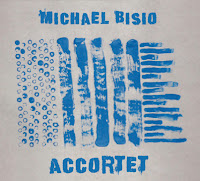 Bassist Michael Bisio's Accortet begins with a breezy tune. Unusual in its texture, which is defined by Art Bailey's accordion playing, the track 'AM’ kind of actually sounds like waking up to a new day rife with possibilities.

Accessible and heartfelt, the opener features some excellent group playing. The following track, 'Henry's Theme', starts off with a shadowy intro featuring cornetist Kirk Knuffke and Bailey. The longing they project is tangible, and again, the accordion’s reedy touch is key. The playing feels a little freer on this track as if the group is starting to stretch out. Knuffke digs deep into his bag of techniques and uses breath, slurs and curt phrasing to great effect and Bisio's solo run in the middle of the song showcases both his melodic prowess and focused playing. I recall a recent duo gig with pianist Matthew Shipp where it seemed like the bassist was ready to rip the swings from the instruments neck, and it is that same type of energy applied here, however more refined and focused - contained and confident.

'Giant Chase' sounds like the title suggests - it's a fast paced romp that sees the group working polyrhythmically, creating a tension that come to a boiling point between Bailey, Bisio and drummer Michael Wimberly. When Knuffke enters, his rapid line darts around the periphery of the form the trio have created, adding more excitement to the mix. 'Times That Bond' finds that group in free playing territory, building off mere suggestions and snippets, listening intently.

Accortet has a unique sound and it puts the accordion, an under represented instrument in free jazz, front and center. That aforementioned breezy start, it would seem, is like the lighting of a gas stove burner. Quickly the flame turns blue - concentrated and cooking. Give this one a listen - especially the middle tracks - it's a keeper.