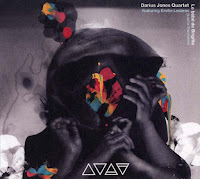 This record may be destined for greatness. Perhaps in an era where every album wasn't immediately available for streaming; perhaps where we had a little more time to fall in love before the next something else. For now, its arrival is still pending. It's not from fear. For anyone familiar with Darius Jones, think Little Women. The man is not afraid. In fact, the album's title alone makes reference to Brigitte Fontaine and, in doing so, shows his hand before you hear a single note. The quartet is joined by French vocalist Emilie Lesbros. On the slow but hopeful opener, 'Two Worlds, One Soul', it might seem a mistake, her inclusion. By the time the song gives way to 'Chanteuse In Blue' however, Lesbros has thoroughly poisoned such doubts. More on that in a bit.

'Universal Translator' stumbles pleasantly and sticks to a morphing rhythm section. Its nod-ability is important, as 'Beneath the Skin (We Are Already One)' returns to the silkiness of the opening piece, pleasing, if uneventful. 'I Can't Keep From Weeping' shifts its initial sonic deployment to match Lesbros's devastating vocal conclusion before the album finishes with 'Quand Vient la Nuit', a Lesbros pinned track and one that returns the record to the singer's smoky and twisted blasts. Which brings us back to 'Chanteuse In Blue'. It isn’t often that a nine-minute freight train of a track begins with a bassline that walks around simultaneously dipping its toes in playful cliché and something sinister enough that it reminds us that this form of music largely originated in brothels. By the two-minute mark however, Lesbros’s vocals turn from the incantations of a bouncy temptress to a hybrid scream/retch, at once furious and in absolute despair. Jones’ saxophone returns the noise with a solo like a bid to win her heart back. She eventually responds with her own “solo” of sorts, a series of spoken blasts that seem to reduce the evolution of human language to one fantastic leap from primal, stone age grunting to the cadence of malfunctioning robots. At the seven-minute mark, Lesbros returns with another retch before the band launches into a jackhammer funk that sees the track to its swaggering, sweltering close. It is one of my absolute favorite musical moments of 2015 thus far. And it almost rescues the aforementioned slower moments of the album. Almost. That it exists at all makes this album worth listening to. Jones is on the brink of something, composing without restrictions to defined form, without haste, and absolutely without fear.