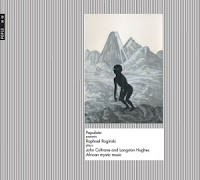 Readers of this blog may know Raphael Rogiński for his justly celebrated treatments of Jewish and Eastern European music, including his Shofar trio (with Mikolaj Trzaska and Macio Moretti) and his work with Wacław Zimpel (Music of the Yemenite Jews, Hera’s Seven Lines). Though these and related projects are important to Rogiński’s ambitions as a guitarist, composer, and activist, his interests and influences range widely—see for example his collaboration with DJ Lemar (also reviewed on the blog) or his recordings of Bach. In his latest solo guitar effort, released earlier this summer under the Polish label Bôłt’s Populista series, Rogiński turns his attention to one of the giants of the jazz canon, John Coltrane.

On African Mystic Music, Rogiński reworks eight Coltrane compositions and offers up two of his own as accompaniment for text by Harlem Renaissance poet Langston Hughes (sung by Natalia Przybysz). But “covers” would certainly be the wrong word here. Rogiński’s interpretations of Coltrane, compared for instance to Mary Halvorson’s new Meltframe, are at times quite abstracted from their source material. While the purists may be disappointed, though, the rest of us will marvel at Rogiński’s musical alchemy.

The opening rendition of “Blue Train” sets a very high bar for the tracks to follow. Eschewing the self-possession of the original, Rogiński builds his take from starts and feints, gaining momentum with gorgeously elastic and permutating finger-picked arpeggios that dig down, rise up, and then resolve into perfect gifts of sound. The balance Rogiński cultivates is expert—the music manages to be light but not delicate, dense but not muddled, intense but not frenzied. And because of the intimacy of the recording itself, the friction of the guitarist’s fingers on the strings and the sounds of his breath become complicit in the devastating beauty of the playing. The ultimate result is more head-nodding than foot-tapping as we find a center in the nest of rapidly woven notes.

Track by track Rogiński redeploys variations of this same basic strategy, but the effect across the album is unity, not repetitiveness. After versions of “Equinox” and “Lonnie’s Lament” (appropriately plaintive), “Walkers of the Dawn” introduces a new element as Przybysz delivers Hughes’s poem over an almost mbira-like guitar. Again, rather than any performative extroversion, it’s the closeness of Przybysz’s singing, as if we were overhearing a prayer, that lends intensity to the performance. Together with the darkly manic “The Negro Speaks of Rivers,” Przybysz’s contributions offer a worthy complement to the Coltrane interpretations and qualify among African Mystic Music’s several highlights—two of which round the album out. “Seraphic Light” matches the agitation of the original, the guitar somehow capturing the blistery, stuttering quality of Rashied Ali’s drums. And “Naima” closes the album, sublime melody intact, a dynamic meditation full of bent notes and pregnant hesitations. It’s obvious that Rogiński knows just where to stop, but as the final notes fade it’s hard not to start the whole thing over.

There is a recent album by Shofar (Rogiński + Trzaska + Moretti), which would be worth mentioning, too: "Gold of Małkinia", released by Kilogram Records (on vinyl only). A great piece of music, the best in Shofar's discography, if you ask me.

I picked this album up on the strength of your review, and am not disappointed. Quite stunningly beautiful. Now manically tracking down more of his work.

great review and great album, I bought it after reading your review. I simply adore this blog. Thank you very much!