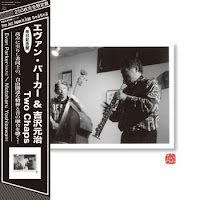 Being a fan of Evan Parker can be quite stressful for your wallet these days. There are a lot of new releases and then there is also an album with music that has been recorded almost 20 years ago. Two Chaps is a recording with late Japanese bassist Motoharu Yoshizawa (1931 - 1998) consisting of five tracks, four duos and a solo by Parker - but although it is mainly a collaboration, it predominantly highlights Parker’s magnificent technique. On the other hand Yoshizawa, a bassist that is actually underestimated even if he had played with Derek Bailey, Steve Lacy, Barre Phillips or Fred Frith, cannot quite compete with Parker’s enthusiastic playing on this album, it sometimes seems as if he has a hard time keeping up with the saxophone’s quicksilver lines.

Already on “Two Chaps 3“, which presents him on tenor, Parker seems to warm up with a circular breathing solo, which he interrupts now and then, as if he wanted to give Yoshizawa time to follow him. As a consequence the highlight of the album is Parker’s soprano solo, “One Chap“, one of the best solo tracks one can possibly find. The track is an excellent example of what has become Parker’s trademark and what some people criticize as being redundant: the above-mentioned circular breathing, which he uses excessively, he actually pushes it to the limits here. In this improvisation he dives in the lower registers playing repetitive minimal lines which are foiled by short outcries in the upper ones. It reminds of an Indian snake charmer gone wild. However, the track that does not only prove his outstanding technique but also his exquisite timing and tone. Sometimes it even sounds as if two saxophones are playing and Parker seems to enjoy this so much that he doesn’t really want to stop - the joyride lasts more than 17 minutes (and you wished it would even go longer)!

In his best moments Motoharu Yoshizawa manages to match Parker’s energy with harsh and raspy bass lines (and he can be really good when he elegantly moves between bowing and plucking as in “Two Chaps 3“) and short vocal outbreaks. Unfortunately, he is not able to do this on all the pieces. But one has to be fair as to Yohizawa’s performance: It might have been better at the actual gig, yet on the album his bass is mixed in the background (especially in the more silent passages) which might be a reason why he cannot really shine.

Two Chaps was recorded live by Takeo Suetomi at Café Amores, Hofu, April 29, 1996.
It is available as a limited vinyl edition of 250 and on CD.  The CD version includes a bonus track (“Two Chaps 1“).