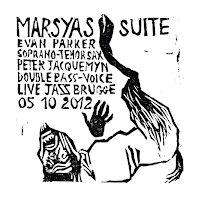 Marsyas is a character in Greek  mythology, sometimes he is referred to as a satyr, sometimes as a peasant. When  the goddess Athena invented the double-reed flute, the first ever reed instrument, she was very pleased with her playing and the sound of the  instrument. But then she saw the  reflection of her face in water and observed the distortion of her features (namely her ballooned cheeks) and threw the instrument away. The one who found it was Marsyas, who soon became a virtuoso double-reed player (some sources also claim that the flute was once inspired by the breath of a goddess and  therefore able to create the most beautiful melodies). Unfortunately, Marsyas became boastful and challenged Apollo, the Greek god and masterful lyre player, to a musical contest in order to find out who can play the more beautiful  music. The victor should be allowed to do what he pleased with the underdog,  the muses were asked to be the umpires. Both contestants played wonderfully and actually the match should have ended in a draw but then Apollo added his voice  to the music of his lyre and finally won. As a result, he punished Marsyas for his hubris, nailed him to a tree and flayed him alive.

A contest was clearly not the idea Evan Parker (tenor and soprano saxophone) and Peter Jacquemyn (double-bass) had  in mind for their album Marsyas Suites, it is rather the notion of what could have been the result of the mythic duel if Marysas and Apollo had played together. Four of the six pieces are duos, two are solos, one by Parker and one by Jacquemyn. Parker’s solo is a six-minute-orgy in circular breathing. The whirlwinds of the upper registers are often counterpointed by single staccato notes in the lower ones, which stresses the meditative and peaceful character of the music.

Jacquemyn, who takes over the Apollo part here, uses fierce bowing and crass overtones (which is quite close to the music Parker created in his solo but it sounds more belligerent) before he stops in the middle of the track adding his voice to his playing (here he reminds of Peter Kowald’s technique) and the music loses its aggressive character.

However, the two solo pieces do not compete with each other, they are interwoven in an artistic whole. In the fifth track conventional and unconventional bass playing, voice, circular breathing and classic saxophone playing are combined, they benefit from each other. Sometimes they dance around each other in the same registers, then again the dark notes of the bass are juxtaposed by high saxophone sounds, before the bass attacks the circular breathing violently.

Evan Parker seems to be on a winning  streak these days (he has released more very good albums, e.g. with Joe Morris and Nate Wooley). This is a rock solid free jazz album, interested listeners won’t be disappointed.

Marsyas Suite was recorded in Bruges in 2012 and is available on CD and as a download. You can buy it from InstantJazz or from the El Negocito website where you can also listen to short passages from the album.