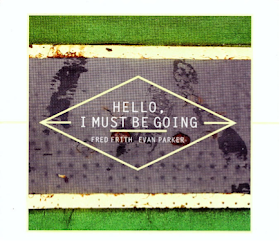 Of all the albums reviewed this week Hello, I Must Be Going, Evan Parker’s duo performance with guitarist Fred Frith, is my favorite one. Although Frith and Parker are both British (however, Frith doesn’t live in Great Britain anymore) and belong to the same generation of European improvisers, this set from Festival International de Musique Actuelle de Victoriaville 2014 was only their third duo performance.

What makes it different compared to the other reviewed duo albums is the fact that Frith has a very individual and highly elaborate musical language at his disposal with which he can contribute to the musical dialogue with Parker. Frith, who plays his guitar mainly on his lap and who uses an arrangement of objects like e-bows, chopsticks, ashtrays, paintbrushes etc., tries to built up various sounds and musical textures that contrast Parker’s lines on the one hand, on the other hand they provide an almost orchestral background in front of which Parker can elegantly solo. Whether these textures are created by classical strumming, flageolets, feedbacks, repeated tapping on the strings or processed loops, Frith is always a classic team player who seems to  presage where Parker wants to go. And though both players search for novel timbres, Frith makes it always clear that it is a real electric guitar that is being used here (and by the way you can hear that Thurston Moore is obviously influenced by Frith).

The effect is that Evan Parker uses much less or shorter circular breathing passages than in the other two duo releases, he rather throws in short licks or even classic jazz themes (in “Read Thread“ there is a short allusion of Willie Dixon’s “Spoonful“, in “Je Me Souviens“ there is a even bebop passage). Frith’s alienated drones and echoes meet typical Parker lines in the title track, and in “Particulars“ Frith’s percussive contributions seem to stem from what sounds like highly fragmented Robert Fripp samples. There is a point where Frith does not provide textures any more, instead he contributes to the improvisation with electronic shrapnel. On “Red Thread“, the longest track,  Parker’s squeezed saxophone tones result in the largest circular breathing passage and Frith simply responds with dark guitar thunder and bass-like sounds.

However, the definite highlight of the album is the closing track “Je Me Souviens“. The last five minutes are pure, pristine sonic rapture with Frith creating layers that sound like organ chords, in front of which he adds accentuated tremolos. Parker counters this carefully knit atmospheric wall of sound with very reluctant pitch variations, he immediately understands what is going on in the background and that you must give this moment time to breathe trying to weave the strands together.

Hello, I Must Be Going is the perfect example of what is possible when the chemistry between two improvisers works, when they are willing to listen and to risk something.  It’s a very recommendable album.

Hello, I Must Be Going is available on CD, you can buy it from www.instantjazz.com and the Downtown Music Gallery.
Paul on Saturday, September 26, 2015
Share