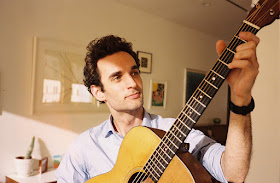 Over the years, I've covered some of the work of guitarist Julian Lage, writing about the duo records with pianist Fred Hersch (Free Flying) and guitarist Nels Cline (Room), as well as the more recent solo album World’s Fair.  Although a bit out of character for the blog, I couldn't pass up an opportunity to speak with Lage, 27, about his work, and enjoyed delving into the guitarists growing relationship with the avant-garde and experimental music scene in New York City.

Our conversation kicked off with his upcoming show at Carnegie Hall’s Zankel Auditorium on October 17th. The show will feature Lage's trio with drummer Kenny Wolleson and bassist Scott Colley, and as Lage says, the group is “kind of a fantasy band.”

The guitarist recalled that when he was eleven, he saw Jim Hall for the first time at Yoshi’s in California. He said, “Jim was my guy - I had been obsessed with his music, and when I saw him with a trio … it was magical.”

The trio with Hall alum Colley and Wolleson has been informed by two interests of Lage, the sound of the guitar itself and early 20th century American music.

He explained:  “At my core I’m an acoustic guitar player, and when I would go to plug in for a show, I've found that it was not reproducing the sound I wanted. It’s kind of an antagonistic relationship I have had with it for years: when I play by myself in a room, it sounds rich and then I plug into a Fender Twin and I think ‘that’s not what I sound like.’ It was this massive denial!”

So, instead of trying to work with the electrified guitar sound (i.e. archtop), Lage said “I want to celebrate what only electric guitars can do, and being somewhat of a nut for the Telecaster, it kind of rooted the project. So with Kenny and Scott, we fashioned a body of music that is partially original music, and songs from the 20’s, kind of a pre-Great American Songbook. There is stuff from the Jack Teagarden book, from the Willard Robison book, W.C. Handy, a composer named Spike Hughes who was a kind of unknown British composer. To me that era of songwriting - the 1920s - was kind of the Wild West - there was a lot of cross-over with country writers and musicians, and jazz, and harmonies moved in … extremely elegant but less codified ways, with quirky and humorous changes that would be considered wrong by many be-bop and jazz players.”

A trio record will be coming out in the coming months, and this concert is, in a sense, is a preview of the new music. However, the solo record, World's Fair, which came out in January of 2015 was not without some allusion to the music that Lage is describing. The arrangements, often kind of stark, to my ears, point to that older sense of composition. But even more influential may be that the recording itself was the result of confronting fear and working around an injury.

When asked about what prompted him to record a solo album, Lage said “I always put solo guitar on a certain pedestal, I thought solo guitar is impossible … not impossible to do but to find a way that was relevant to me. I thought I have to find a way with one guitar, and no amplification, to play a compelling set of music – I thought no way, that’s going to be crazy,” he laughed, “so I put it off.”

The way it came into being was through a grant from the Shifting Foundation, which, said Lage, "has been a supporter of artists, writers, musicians, and a lot of the avant-garde community." As the parties discussed project possibilities, "they asked 'what are you afraid of?' I said 'sitting down and playing solo guitar. They said ‘bingo, we want to help you do that.’ I agreed. I took a summer off to do it, and within a week I, blew out my hand.”

The delay, however, prove fruitful. Instead of continuing with the same approach, Lage changed things up - he lightened his approach after deciding that he didn’t need to be the bass, the chords and the melody all at once. He thought “how rare would it be to have a record where you don’t have to be bombarded with all that information, where you are able to listen to just one note on a guitar, in a way that maybe I take for granted when I’m just in my bedroom playing.”

So, the first record? “I ended up throwing it out, pretty much completely. We re-did the record and that’s what we ended up putting out.”

It was again the Jim Hall connection that led to the recent collaboration with Nels Cline. As he tells it, it was a monthly luncheon for Hall organized by a mutual friend that eventually led to Lage and Cline meeting. “I met Nels when I was about 16 years old, and I had always been a fan,” says Lage, however as the lunches were happening, it was infrequent that the two, now both in New York, would see each other. “Eventually it worked out that we’d be there at the same time, and we met up at the lunch and we began talking, and we began playing the next day, and the gig was like a week later (note: at Le Poisson Rouge in NYC, the duo’s first gig, which if I'm not mistaken, was an event arranged by the Downtown Music Gallery). Originally it was going to be something with cello and two guitars … but the cellist couldn’t make it to the gig, and so we said 'let’s just make it duo', and that’s how it began.”

The pair released a single in 2013 and then the album Room in 2014. Their repertoire, which began with songs that Cline had written for projects like the Singers, gave way to new compositions, or as Lage explained, kind of variations on a theme “There is a strong connection with the Jimmy Guiffre and Steve Swallow kind of era of writing - they're squibs, they are pieces that aren’t terribly definite. It’s like ‘here’s a phrase, do what you want with it, then return to the phrase. Sometimes there will be directions that aren't too specific, like ‘move up’ or ‘alternate’ … it’s really fun, it’s one of my favorite things in the world.” Lage said that he’s looking forward to their tour in October and recording another record soon.

Continuing down the road of avant-garde, we spoke briefly about a piece on Lage’s YouTube channel where he plays Anthony Braxton’s “Composition 23c” with saxophonist Dan Blake. Lage says that the avant-garde world (a word that he used a few times in describing the music and musicians) was something he didn’t necessarily get into as a younger player, but, “I've always had a fascination with composers like Braxton and it always seemed interesting.” He continues, “The avant-garde world always seemed like one of the happiest worlds.”

"I’d see people who leaning in that direction, or fully in it, and they seemed so liberated and there didn't seem to be a concern about ‘is it true to tradition’, ‘is it right or wrong’ … there just didn’t seem to be any fear, that was my sense from afar. Coming to New York, and playing with Dan Blake had a huge influence on me in terms of exposing me to the music and musicians.”

Lage described the Braxton piece a musical game, and following the direction of the composition helped him access something that he may not have discovered by himself. “Wow,” said Lage of playing the piece, “you can feel that way and can make that sound and it's ‘official’. When I played with Nels at the LPR gig I felt for the first time in my life that I had totally found my people. I thought to myself, ‘wait a second, we can do this and people are hearing it and they hear the sense of humor … a lot of my life has been, and it still is, is trying to be good at the guitar, or at least not to suck, and learning about this challenge or how you do that, but I realized why you even want to learn to play an instrument is to be able to express what you want, and that was a wonderful feeling that playing with Nels helped me feel.”

The enthusiasm is genuine. He has recently performed in John Zorn's Bagatelle series at the Stone in NYC, where musicians have worked through the composers recent series of pieces, and said he now finds himself being drawn further into this world. Says Lage, “in jazz education there is a sense that you have to earn the right to be free.” He explains, that you can express an interest in free music, but you need to put it aside to be a student and ‘clock in the hours.’ “But,’ he says “playing with Yoko, or Zorn or Nels, it's kind of like ‘forget that, we’re freer than we realize!’ I love it, I feel increasingly drawn to it, increasingly like I want to be part of the community, and contribute, and write, and take some more chances. I feel extremely privileged to be in the neighborhood of these people and to get to work with them.”

As the interview wound down, we spoke about his interest in some other music, specifically of Musique Concrete and how he used to spend weekends at UC Berkeley at the The Center for New Music and Audio Technologies. The center was run by David Wessel, who passed away in 2014, and as Lage describes “was a wonderful electronic musician who worked a lot with Roscoe Mitchell and George Marsh.” We name check some other musicians like Derek Bailey and Evan Parker, as well as digging deeper into the Zorn catalog, but surprisingly Lage mentioned his interest in an European metal band called 'Oceans Ate Alaska' and says “it may not be considered avant-garde, but to me it’s avant-garde.”

Lage's current tour dates can be found on his site.