"I’m becoming more and more ‘religious’. By that I mean that everything has a purpose, and in this department of my life, in my music, it just flows; I don’t have to force anything".

2015 has seen the release of a new batch – to be reviewed over the next three days (another is due soon) – each of which confirms the benefits of close and prolonged exposure, both in the studio and live performance. In my opinion, Perelman’s quartet is well on its way to ‘Classic’ status (take a look at their performances on YouTube); ditto with the Perelman/Shipp duo, one of the most fruitful partnerships in current jazz. It’s not just about a shared language however, but what is unique to each of these combinations in terms of sonority and musical character. 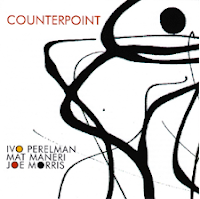 “The combination of simultaneous voice-parts, each independent, but all conducing to a result of uniform coherent texture.” (definition of “counterpoint” in The Oxford Companion to Music)

For Perelman, this recording was a challenge to integrate his tenor saxophone with two very different instruments: the viola (Mat Maneri) and the electric guitar (Joe Morris) – bowed notes and plucked, acoustic and electric sounds. As the title (and cover art, also by Perelman) suggest, the album is also about contrapuntal flow, ensuring that an even balance is maintained between the instruments without any leading voice, no part having prominence over the others. There’s no foreground or background as one finds in most music where instruments are highlighted or drop back from time to time.

This is actually much harder to achieve in improvised music than it might sound (and the whole album is completely improvised) as each player must focus not only on what he is playing, but on how he is contributing to the music heard as a whole; and nobody gets a rest. This is what John Stevens’ Spontaneous Music Ensemble was about, and one of the things that gives certain of its albums (e.g.: Quintessence (Emanem, 2007)) such a distinctive sound world. Whereas the SME’s textures were pointillistic, however (taking its cue from Stevens’ drumming) here we have a delicious mix of points and lines as tenor, viola and guitar wrap around each other like vines.

Four of the ten pieces are saxophone and viola duos, and in a number of respects the recording follows on from Perelman and Maneri’s Two Men Walking (Leo Records, 2014) in which the lines are so closely entwined that it’s more an attempt at fusion than dialogue. On this date, the guitar opens up a little more space -- it’s not quite as claustrophobic – and Perelman’s tone is often softer, to achieve a more euphonic blend with the other instruments.

Of course, this is not the same counterpoint as one finds in a Bach fugue. Rather than common themes, there are shared melodic cells and shapes, even a uniform tessitura: the instruments rarely stray out of the middle register, a mellifluous sound reinforced by the jazz guitar tone favoured by Morris: muted and valve-like.

Counterpoint provides endless potential for how instrumental threads can be woven together. As Nick Tesser points out in his excellent liner notes, there are times when the instruments mimic each other, about as far as you can go in sublimation to ensemble sound. This allows occasional timbral counterpoint, such as where saxophone slurs match glissandi on the viola, pizzicato overlaps with tiny bursts on the saxophone, or glassy string harmonics also sound as high pitched notes. Sometimes, notes within the phrase from which the piece is generated are hit in unison within the criss-cross patterns, making them jump out in new configurations. The instrumental lines can proceed more or less independently; on other occasions there’s a clear exchange of material, which can be fleeting or more expansive.

Three instruments does not necessarily mean triple counterpoint. In ‘Part 5’ there are two lines. Saxophone and viola are enmeshed and appear to be supporting Morris’ bubbling guitar but gradually the roles are reversed so that by the end the guitar seems to be taking the supporting role, giving rise to the question: who’s accompanying whom, and does accompaniment even make sense in this context? In ‘Part 4’ one section is reduced to a single line, comprised of three closely spaced instruments. Either side, there’s a mosaic of colour.

A common observation about counterpoint is that it can achieve unity in diversity: distinct voices that also form a whole. It’s also a way to overcome the often episodic nature of improvisation. It provides continuity of thought without prearranged material – flexibility, with coherence over a longer span. The danger of course, is insufficient variety and contrast: the music becomes too homogenous (on occasions, this was a problem for the SME). Here, this is overcome by keeping the pieces relatively short – between two and nine minutes – adopting different tempi, and juxtaposing music of contrasting character, as Bach does in his Goldberg Variations. ‘Part 2’ is all marionette-like movement; ‘Part 6’ is reflective with sensuous double-stops on the viola; and ‘Part 9’ begins with almost frozen, slow-moving lines which thaw as the piece progresses.

An intriguing and very rewarding album.