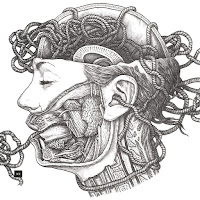 There’s always something that starts the rush.  That most-Hollywood-of-all-things blast.  The scream before the army rushes down the hill.  The kiss before the fade and implication, or something more gratuitous.  The junky shots, the inner-needle shots, that cloud of blood before the hammer drop.  You know, the rush.  And maybe most cliché of all: the spotty little wind-ups and grabby little metaphors that start album reviews on every music blog ever.  You get it: the rush.  The call from something – short, not always sweet – and the response.  Fred Longberg-Holm and Paal Nilssen-Love, no secret, make a lot of music.  Some is in support of tighter compositions and stricter interplay (see Vox Arcana’s Caro’s Song).  Some is more exploratory, more isolated, though without all the whispered platitudes of what many associate with introspection (see Nilssen-Love’s Cut and Bleed).  Almost all of it is quality.  Snippets of sounds made by musical lifers that recognize enough of their prodigious talents to give a shit and cultivate them, grow them.  You Can Be Mine was put to tape in 2012, but I don’t think it’s a stretch to say that this is what Nilssen-Love left Atomic for (perhaps not specifically, but in the same spirit).  He said he wanted to explore more improvisation.  This in mind, there are two ways to look at the opening moments of You Can Be Mine.  The first concerns Lonberg-Holm.  He may have talked at length with his counterpart beforehand.  I’d like to think he didn’t have to.  Regardless, he gets it.  The beauty of brevity, that is.  And whether you hear a scream leading an army to war or a kiss leading a couple to fuck, we can agree that Lonberg-Holm’s initial note is a key turn.  He unlocks Nilssen-Love and there’s nothing pretty sitting behind the kit.  The second concerns time.

Like T.S. Eliot responding to absurd accusations concerning whether or not he actually understood meter, Anthony Braxton once answered some equally absurd questions concerning his view of time – specifically as it applied to his playing – by saying (I paraphrase) that he approached his pieces within the constructs of all of time.  Not within the minutiae of a measure, or song or album or even period, but of all time.  I’m not sure if he was implying that his music could soundtrack the birth of the Earth, the breathing of the universe and any point within its continuous growth, or if it simply ran parallel to all of this, with all the beauty and dissonance to match.  Whatever the truth of his philosophies, in practice they share a form with Nilssen-Love’s playing.  You Can Be Mine has that single cell quality.  Not concerning complexity of course; it’s astoundingly difficult music.  Rather, it provides a soundbite of time that doesn’t summarize so much as it reveals its elasticity and disdain for all things linear.

The periodic “quieter” moments – or at least moments that relent even slightly, like the break of drums and cello to yield to Lonberg-Holm’s electronics midway through The Pleasure Principle, are perhaps the most revealing.  It would be easy to become so disoriented by the playing of both musicians to hear something more combative in the finished recordings, like watching a street fight, or a hearty argument at least.  But it’s these moments of quick breaths that dispel any inkling to reduce the record to quarreling or competing virtuosos.  Nilssen-Love’s periodic restraint and (especially) Lonberg-Holm’s electronics reveal how well the space between the players was actually cultivated.  The upkeep that said space receives throughout the entire piece is truly a marvel.  I would argue that, if anything, the facilitation of shared and personal space is what most invites relistens.

At this point, I could walk you through each track (and usually I would, describing Lonberg-Holm’s serrated notes to start Nasty and such); but what’s the point? It’s Lonberg-Holm and Nilssen-Love on a duo recording.  There’s only a handful of musicians in the world with enough chops and sand to walk into a room with either man and say, ‘Let’s play.  Just you and I.’ If you’re a sonic wanderer, here’s a journey.  If you’re a musician, here’s some shit you probably can’t play – but it’ll inspire you, I’m sure.  If you’re looking for more backstory, I can’t help you much there.  I couldn’t even find the record on Bocian’s site.  And if you’re like me, a little nothing speck in an infinite blackness, a millionth of a second in the contours of all time, here’s a little record that might not give you any answers but it’ll definitely show you what you’re up against.  It’s your story too.
Highly recommended.
Paul on Thursday, October 29, 2015
Share