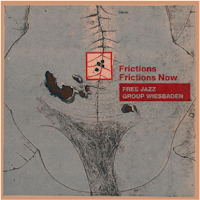 In my review of the album Intricacies by Paul Hubweber’s quintet I said that it could be called the second part of a mini series about German musicians who deserve more attention and that the third part would follow in autumn. Now is the time: the band we are talking about is Free Jazz Group Wiesbaden (FJGW) and the musician who deserves more attention is Michael Sell. But there is a difference to Paul Hubweber and Stefan Keune (whose album Fractions was the first part of this mini series): Keune and Hubweber are still active musicians, their albums are new releases, while FJGW’s Friction/Frictions Now is a reissue. Yet, it’s a real revelation!

FJGW consisted of Michael Sell (trumpet), Dieter Scherf (saxophones, oboe, piano, flutes, Shenai, trumpet), Dieter König (guitars, flutes) and Wolfgang Schlick (drums, percussion) and in the four years of its existence (1968 - 1972) the quartet recorded two albums. Frictions was released as an edition of 300 vinyl records on a private label in 1969 (the same year there was a second edition of 200). Then there was Frictions Now, the band’s sophomore album,which was recorded in 1971 and released as a limited edition of 500 vinyl records. Both albums are hard to get and even if you were lucky you would have to pay fantasy prices.

What makes FJGW so great are the different and various musical means they have at hand: classic bebop riffs, world music influences, free collective improvisations, Kraut rock elements, 1960s psychedelia, etc. However, at the heart of their music is classic African-American free jazz. But although the two albums share the same impetus and approach, there is also an important difference: “Frictions“ is partly notated and presented as an uninterrupted piece although it actually consists of seven Sell/Scherf compositions: “Intro For Four“ is a trio of piano, flute and drums and reminds of Don Cherry’s double flute excursions; “Topology“ refers to the themes used by Albert Ayler’s groups just to drift off in a collective improvisation; “Töne“ is a duel between the reeds and the guitar and makes the impression of a modern jazz theme; “Sounds For M“ sounds like a Miles Davis riff, “Töne I“ is another short modern jazz interlude; “Ballad - Allintervallreihe“ is a theme played  unison before “Peaceless“, a marvelous reed drone, brings the track to an end. All this preconceived material serves to structure the improvisations, which are dominated by free, very energetic and atonal reed lines, fragmented and twitchy guitar chords and polyrhythmic whirlwinds. The whole conception can be described as a mixture of explicitly planned formal processes and a careful arrangement of sound layers on the one hand and spontaneous interactions and raw rhythmic eruptions on the other hand. The music “unfolds in frequent variations of timbral textures“, as Ernst Nebhuth puts it in the very informative liner notes.

In contrast to “Frictions“, both parts of “Frictions Now“ are freely improvised music, the focus is clearly on spontaneity. However, the music is elaborate and structured  by Dieter König’s extraordinary guitar, which is used in a multifunctional way (he plays single notes on the deep strings so he can take over the functions of a double bass, but he also creates brittle chord splinters which anticipate Sonny Sharrock's or James Blood Ulmer’s sound), by Sell’s short, aggressive trills on the trumpet, which remind of Manfred Schoof’s style at that time, and by Dieter Scherf’s solos, which are characterized by certain melodic features that again recall Albert Ayler.

After the split of FJGW Michael Sell continued to work as a musician and a composer, his music can be described as a mixture of free jazz and new classical music. Especially his works from the 1970s (e.g. 5 Stücke Für 11 Instrumentalisten Oder Instrumentalistinnen) and 80s (e.g. Innovationen Für 10 Instrumente) on his MISP label are interesting as well.

Kudos to NoBusiness for their effort to make FJGW available on CD, all the more if you consider the very reasonable price. Highly recommended!

You can buy the CD from the label and the Downtown Music Gallery.
Paul on Wednesday, October 28, 2015
Share