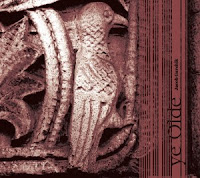 
Billed as “a 2015 cover of the soundtrack to a 1970’s remake of a 1930’s movie about the Middle Ages,” Jacob Garchik’s Ye Olde is a sly, propulsive wall of sound. Much credit to Garchik for delivering so precisely on the promise of his concept, but the final product wouldn’t be the same without this exact group of musicians. Vinnie Sperrazza’s heavy kick drum and open, splashy cymbals bring that 70’s heavy metal drive. And on guitars, you’ve got three of the most creative and sonically interesting players, Jonathan Goldberger, Mary Halvorson, and Brandon Seabrook. And of course, Garchik is all over this record, bursting through the funky haze with crisp, bold lines.


Because Ye Olde is something of a soundtrack to an imagined medieval quest, tracks are divided between the plot-driven “songs” and transitional “wipes,” brief interludes between each set piece. The songs introduce the large cast of characters, including Mortise Mansard, Queen Anne, “The Lady of Duck Island,” “The Elders of Ocean Pathway,” and “The Opossum King of Greenwood Forest.” Throughout, Goldberger, Halvorson, and Seabrook shift through hocketed melodies, solos in round, and just about every effects pedal at their feet.


Each smaller event builds to the three-part conclusion of the story, beginning with “The Battle of Brownstone Bulge,” the 6-minute menacing and lurching climax of the album, featuring a stirring solo from Garchik. Ye Olde pauses for “Refuge In the Ruins of Castle Martense,” a sonically rich breather, with its trombone chorus, fading drums, and syncopated guitar, leading to the final track, “The Throne Room of Queen Anne.” Filled to the brim with royal brass, marching snare, and crenelated riffs, “The Throne Room” brings grand closure to this fantasy quest.


Some albums are exciting just by the nature of the lineup, garnering a kind of “What will that even sound like?” anticipation. Like Kris Davis’s Infrasound, from earlier this year, Jacob Garchik’s trombone, drums, and three guitars lineup for Ye Olde was, on paper, too interesting to resist. And on record, it’s fantastic.

This is a GREAT show live, too! Thanks for the review!