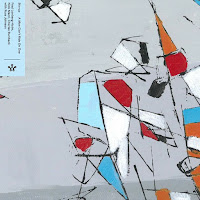 "Stirrup" is a trio that plays in some separate musical category, making them hard to pigeonhole, with Fred Lonberg-Holm on cello and tenor guitar, Nick Macri on bass, and Charles Rumback on drums, here joined by Russ Johnson on trumpet on half the tracks of this live performance at The Whistler in Chicago.

Macri and Rumback lay a solid and unwavering rhyhtmic foundation for all compositions, often more rock-influenced than jazz, except for the continuous shape-shifting of their approach, and Fred Lonberg-Holm makes his cello howl as we know him, although there are moments when it sounds 'normal', yet without warning it can switch to hard noise.

When Lonberg-Holm plays electric tenor guitar - a 4-string guitar - he plays it almost like a cello, using single string notes instead of chords, chasing the sound through his pedals and resulting at times in some violent feedback and full sustain soloing that is reminiscent of rock guitarists of the seventies, but he is even stronger when he plays the cello. The outcome is violent and disciplined at the same time, with really strong compositions and themes. The duelling solos between Lonberg-Holm and Johnson are really magnificent, and it was a great idea to invite the trumpeter to join the performance.

Fans of the first album will recognise three of the tracks, but the fact that Russ Johnson joins and that it's a live performance gives a different quality to it, and there is a lot to enjoy here, the overall sense of musical abandon, full of relentless energy, of rhythmic joy and coloring outside the lines without alienating listeners. In short, it is great fun, with four musicians at their best.

The album's title is a reference to the old saying when offered a second drink, but it is also a response to Joe Mcphee's call of 'A bird can't fly on one wing', so we learn.