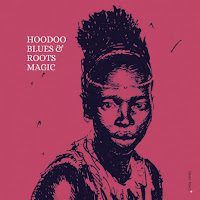 Like Mary Halvorson’s recently reviewed Meltframe or Raphael Rogiński’s African Mystic Music, the Italian quartet Roots Magic brings us an album dedicated (mostly) to interpretations of other people’s music. The group consists of Alberto Popolla on clarinets, Errico DeFabritiis on alto sax, Gianfranco Tedeschi on double bass, Fabrizio Spera on drums, and as a guest, Luca Venitucci on organ, melodica, and amplified zither. On this fun, approachable album they prove themselves more than up to the task of rendering some well-chosen, time-tested avant-blues with equal parts gusto and precision.

The group dives into the album with a back-to-back-to-back assault of soulful tunes, beginning with Julius Hemphill’s “The Hard Blues.” Here we see the qualities that will characterize the project more generally: faithful “covers” delivered with assurance and intention, very cleanly recorded; muscular but fluidly lyrical clarinet and sax solos (and double-solos), modestly/tastefully contained by the compositions’ structures; and a supple, steady rhythm section. Phil Cohran’s indelibly catchy “Unity” keeps things moving with a deep-in-the-pocket cowbell groove and horn lines that snake in and out of Venitucci’s melodica ostinato. Third in line, John Carter’s “The Sunday Afternoon Jazz and Blues Society” gives the group a chance to loosen up with a bit of controlled chaos, especially Spera’s rowdy drum-work under the tune’s bouncing Ornette-ish melody but also in the burning double-solo towards the middle.

Beyond the two other pieces drawn from the jazz lineage (Sun Ra’s “A Call for Demons” and Olu Dara’s “I Can’t Wait Till I Get Home”) and two original compositions—quite competent but somewhat overshadowed by their unbeatable company—a highlight for Delta and gospel blues fans are the group’s takes on Blind Willie Johnson’s “Dark Was The Night” and Charley Patton’s “Poor Me.” On the former, perhaps the track I find myself revisiting the most, Tedeschi hands the melodic line off to DeFabritiis before bringing out the bow, and the song swells above the sea storm of Spera’s cymbals and mallets. Here group not only captures the haunting mood of the 1927 original but uses it as a point of departure for what develops into such a personal, organic, and emotional musical experience that it makes us wish they had allowed themselves more opportunities for exploration and discovery elsewhere. They do what they can to recreate some of this magic in the middle section of “Poor Me,” but it’s less convincing and a bit awkward sandwiched between the relatively humdrum melodic choruses, suggesting the potential limitations of this kind of obligation to source material.

you should always listen as if you first listen to life.