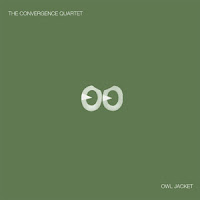 The Convergence Quartet is a kind of transatlantic superband with Taylor Ho Bynum on cornet, Harris Eisenstadt on drums, Alexander Hawkins on piano, and Dominic Lash on double bass, and all four musicians contribute to the compositions. Their previous album "Slow And Steady" received a raving review, and the expectation of their next album was understandably high.

The first track, "Dogbe Na Wo Lo", already delivers the goods. A Ghanian traditional with a beautiful theme, it is wonderful arranged by Harris Eisenstadt, with deepfelt improvisation by Ho Bynum, and magisterial playing by the rhythm section, including the piano's subtle chords and power.

The second track is penned by Dominic Lash, and the tone shifts into a quiet improvisation that gradually gains power and momentum with Alexander Hawkins leading the piece with angular sounds and rhythmic inventiveness, creating a solid backbone for bass and drums to go wild, and when the cornet joins, things quieten down, and the rhythm becomes even more hesitating and halting.

"Coyote", a composition by Taylor Ho Bynum, is more playful in its approach, with cornet and piano engaging into a refined dance full of joy and lightfootedness, with Eisenstadt offering us a myriad of percussive delights to emphasise the prancing theme, which will linger in your head long after you've finished listening to the album.

Hawkins' "Owl" adds drama to the album, with a short repetitive and almost percussive theme, and it seems that only the cornet and Hawkins right hand provide some stability to the piece, with bass and drums and the piano's left hand creating energetic mayhem in contrast, yet then it evolves and comes back, like an endless and fast contraction and expansion inside and outside of the theme. It is simple and complex at the same time, collapsing and desintegrating somewhere in the middle of the piece, then offering a peaceful moment of almost cool jazz improvisation with sparse notes by piano and cornet, repeating the core theme, yet differently, solemnly, quietly, as if some resolution had taken place.

It is followed by "Azalpho", a short composition by Dominic Lash, also angular and percussive, playful and fresh.

The album ends with another traditional Gambian song arranged by Eisenstadt, who spent some time in Africa studying 'griot' music and rhythms, and we can all be the happier for it, because this is again a great piece, and without a doubt the most free track on the album, one where the joy of playing is even stronger than on the previous tracks, very open-textured and often just plain fun to listen to, because of the little jokes, the perfect interaction and imitation between piano and cornet, and all that with some complex polyrhythms by Eisenstadt, and slowly, after a very jazzy interlude by Hawkins, the free play shifts into the African theme, again a beautiful theme, and the chaos and the freedom are left behind, and what comes up is just harmonic interaction, full of sensitivity and vulnerability and wonder. A great closer for a wonderful album.

Overall, the album is good, very good, with four musicians whose skills are not questioned. At times, these skills risk to take the forefront, which may lead to a more distant delivery than on their previous album, but it's still highly recommendable at all levels.