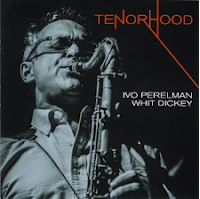 In recent years, Perelman’s playing has lost some of its earlier brittleness and acerbic edge, in favour of an enhanced phraseology and extended tonal palette. His vocabulary has increased as he’s found new things to say and contexts in which to say them. He’s also matured in his appreciation of the history of the tenor sax, for him: “a vast and deep tradition”. Perelman has a unique voice (in fact, several) which did not spring fully-formed from his saxophone, but developed while absorbing the work of his predecessors. Inevitably, these traces show up under a certain kind of light, which is what happened at this session.

No consideration was given to what Perelman and Dickey (drums) would play. They just got on with it, but after about six numbers Perelman realised that he was tapping into reflections that had been on his mind for a while – the sheer flexibility of the tenor saxophone and how it had accommodated so many great players of differing styles. The pieces were named after playback, dedicated to those whose voice he heard in each performance: Hank Mobley, Ben Webster, John Coltrane, Sonny Rollins and Albert Ayler. The peculiar thing is, Perelman’s playing is quite different on each track and on most the dedicatees are obvious, even though they weren’t consciously in mind when he recorded them. Intuitively, he’s turned to the past to explore the present.

Hank Mobley, a doyen of hard bop, made music that was upbeat and optimistic, qualities generally frowned on in our cynical age. He had a fluid tone and an unerring sense of melody; he was also a notable tunesmith. ‘For Mobley’ opens with a funky feel and rolling drums, Perelman drawing the outline of a melody which has the definite punch of a bop tune. He slithers into the top registers and eventually focuses on a simple, catchy motif whose treatment is the basis for the remainder of the piece.

As well as having an immediately recognisable sound – warm and vibrant – Ben Webster’s mastery was such that he could express more in a single sob than other saxophonists could do over a whole solo. He treated the Great American Songbook with tenderness and reverence. There’s no hubris in one of his albums being named King of the Tenors (Verve, 1953). Perelman is not some kind of musical impressionist, however. Nor is he using the idiosyncrasies of his precursors’ playing or their distinctive fingerprints in the way that say, Dexter Gordon (another great tenor) would quote bits of other tunes in his solos, as if with a wink to his audience. The relationship is more subtle. On ‘For Webster’ there’s an identifiable burnished tone which occasionally quivers, and once or twice the tenor sighs. There are even snatches here and there that sound like something from a standard. But this all takes place amongst arabesques that are pure Perelman. He’s not moving between his own and someone else’s playing; it’s more like a pair of transparencies held up to the light so that the images merge. Such considerations also suggest that influence is part of a continuing process. Past masters are not learnt from and cast aside, having served their purpose; rather, history is something with which we remain in dialogue.

‘For Coltrane’ is a short piece. There’s the characteristic appoggiatura and scalar run, but this is not the Coltrane of the extended solo – exhaustive, and sometimes exhausting – but a tune that is pure late Coltrane, plangent and yearning, expanded with playing that seems to ask more questions than can be answered. It concludes with the theme played in a soft, prayer-like acknowledgment.

Sonny Rollins is an improviser of astonishing fecundity, probably best appreciated in live performance. His studio albums often only hint at his powers of invention (try: Paris 1965 – Copenhagen 1968 (Gambit, 2008)) but again, it’s not the marathon solo that’s invoked here. Instead, ‘For Rollins’ is in part about his ear for shading and tonal variation, something integral to Perelman’s own work. He opens with a fruity tone, reminiscent of Rollins and a melodic line that’s constantly embellished. From about the mid-point, Perelman carries on a free flowing dialogue with himself: a sharp and blistering tone against quasi-trumpet. This proceeds with rapid alternations but since the registers don’t have identifiable boundaries, there’s also a metamorphosis of one into the other, eventually into the theme and tone of the opening section.

In my view, Albert Ayler is a key figure in understanding a lot of what Perelman’s up to, particularly Ayler’s solos which seem to have left a deep mark on Perelman’s music. What baffled his contemporaries was not so much that Ayler didn’t play choruses and work through the changes (Ornette had shown that was unnecessary) but that his solos seemed to observe no musical logic. To the casual ear, they sounded all over the place: fragmentary and barely related phrases criss-crossing the tenor’s spectrum, sliding around notes and using registers and blowing that were plain wrong. This was not rule-breaking for its own sake and the absence of logic does not mean his playing was without reason. With Ayler, there was a fundamental shift in musical and aesthetic priorities which gave rise to not just novel sounds but new means of expression and in consequence, things to express. Ayler’s music is the spiritual solar plexus of free jazz.

Although sonority was an important feature of jazz as a means of adding colour, in Ayler’s solos the roles were often reversed so that primacy was given to texture and contour as the governing means of expression with melody having at best, secondary status; it was not so much what he was playing but how it sounded, and felt: the unadulterated psyche (part of the modernist quest for artistic authenticity). This shouldn’t detract from Ayler’s melodic gifts which had their roots in field songs and New Orleans. For him, reaching back was part of the move forward, making his relationship with tradition particularly complex.

Lateral movement also came to the fore. Like Ayler, Perelman has no interest in the most obvious route between two points, as the meandering road – the one less travelled by – can open up unexplored areas and prompt fresh associations. Ayler’s solos were never the same, even in the ubiquitous ‘Ghosts’. There can also be poetry in half-complete or broken thoughts, the tentative or sketched image: a sense of mystery lifting them above the everyday. It’s there in Ayler (and Monk for that matter) and is prominent in Perelman’s playing. There’s greater emphasis on the twists and turns of imaginative thought – music that can only be found wanting by those who place a premium on coherence and see no value in the irregular.

‘For Ayler’ shows the extent to which his innovations have passed into the mainstream of free jazz. There’s a melody akin to one of Ayler’s rubato tunes, though never stated in full: a smidgen here, a few bars there; a skittish line that wanders into the falsetto, which behaves like the whiplash gestures in Perelman’s paintings; and occasional blocks of rapidly alternating notes. In a spontaneous melange Perelman reshapes the material, picking out different facets, elsewhere fusing them. The performance is brought to an end by him trying to compress everything into short, repeated honks.

So far as Dickey’s contribution on the album is concerned, musically speaking, he is not a busy drummer. He doesn’t underline points or vie for attention. Instead, he produces finely tuned responses to nuance and flux. He’s complimentary and supportive, sensitive to changes in register and volume, and not afraid of a simple backbeat to lend emphasis. There’s an art to understatement.

The title track contains no saxophone, just drums. Some might say this is making an ironic statement about presence through absence, or that the ultimate tribute is no tribute, or one could see it simply as wry humour. It’s a gentle piece played with mallets, consisting of delicate rolls and cross-rhythms with whispering cymbals: the antithesis of a drum solo.

Out of curiosity, I played Perelman’s earlier recording with Brian Willson (drums) -- The Stream of Life (Leo Records, 2010) – to see if specific antecedents could be heard there. Not really, at least only in the most general fashion or as occasional bubbles of influence rising to the surface; not in the same way as this album.  On Tenorhood there’s very much a sense of voices past and present informed by and informing, each other. As Perelman puts it: “I think the tenor saxophone may be the instrument of jazz history”. I think he might be right.

Another excellent review, Colin. Thanks for your insights into Perelman, and the tenor tradition in general. Very informative stuff--I even had to get out the dictionary a couple times (I had no idea what appoggiatura meant). Perelman is often under-appreciated, in part I think due to the sheer volume of his output. It seems impossible to keep up with all his releases each year. It's valuable to have such a fine overview of his work and the context behind it.

Thanks Troy. It is difficult to understand why Perelman is not better appreciated, and I think the reason you mention might be one of them: with so much to choose from people feel rather overwhelmed. The other possible reason might be that generally, people are suspicious of anyone who claims to to good at more than one thing.

I concur with Troy, really enjoyed the background on the different influences. Great set of reviews.

Thanks for these reviews of Perelman's music, Colin! Both the music and your descriptions are of the highest quality.

Speaking of Perelman, his collaboration with Karl Berger, last year's "Reveries", made for a great record that went largely unnoticed. I recommend it wholeheartedly!