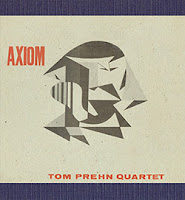 Homer’s epic poem ‘The Odyssey’, my tenth-grade English teacher explained, begins ‘in medias res’ - into the middle of things. So too does Tom Prehn’s Danish quartet on Axiom, originally recorded in 1963 and unissued until 2015 on Chicago’s art-house imprint ‘Corbett vs. Dempsey’. Two side-long tracks were produced in Copenhagen for the Swedish Sonet label, and test pressings including finished artwork were sent to the musicians. For whatever reason, the project stalled. Whether it was ultimately the musicians or the label who nixed the release isn’t clear. Prehn himself notes, “The music already seemed old to us. And as it were, not arranged or meant for the traditional record media.”

It’s entirely possible that neither the group nor Sonet wanted the music commercially available. Yes, Ornette Coleman’s Free Jazz had already hit the racks, but Albert Ayler’s Spiritual Unity wouldn’t be recorded until halfway through 1964, and John Coltrane’s Ascension was still two years away. Perhaps taking a chance on Prehn’s bold new language didn’t feel economically viable at the time? The Tom Prehn Quartet displayed here is a young one - the four were in their early twenties at the time of recording, and it shows. Tenor saxophonist Frits Krogh sometimes appears to be playing more than he’s listening, and it doesn’t help that this release is sewn together from two of the remaining ‘seldom played’ test pressings. Sonically, Krogh often drowns the others out, and coupled with Finn Slumstrup’s tinny drum kit, one can’t readily decipher Poul Ehlers’ bass or Prehn’s delicate clusters of chords. Thankfully, sax and drums lay out seven minutes into “Axiom 1”, allowing Ehlers and Prehn to bloom.

Both tracks ignite in medias res, Krogh frantically summoning shades of later period Dexter Gordon and Sonny Rollins. The second track, “Axiom 2” is a natural continuation of the first. The third piece, “Percussive Anticipations”, was recorded for Swedish radio in 1966 and fares much better in terms of fidelity and structure. The band has clearly matured in three years time, and converse with increased sensitivity. Tom Prehn’s Axiom gives us a rare glimpse into the early days of free jazz in Denmark and is housed in a beautiful cardboard LP-style sleeve. Historical significance aside, it doesn’t really beg repeated listenings, nor offer extraordinary engagement with the listener. This is a group still learning to speak among themselves.