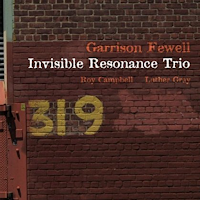 It's wonderful to hear another album, albeit sadly a posthumous one, with Garrison Fewell and Roy Campbell, two of my favorite musicians who sadly passed away this year and last year respectively, and we hear them here in the presence of Luther Gray on drums.

Fewell is a phenomenal guitar-player, somebody who does not need many notes to set an atmosphere or come to the sonic point that really matters. I've also always appreciated his humility in making the other musicians shine rather than putting himself in the spotlight. No doubt his buddhist views play a role in this. The advantage of this more limited line-up, is that his guitar can be heard at all times, and it sounds as can be expected: clear-toned, jazzy, supporting the trumpet, accentuating, and then soloing with incredible precision and accuracy for the right notes, the ones that contain this emotional delivery, offered to you with beauty.

Campbell is a very soulful, or even bluesy trumpet-player, also a man of deep humility, and in that sense a perfect match for Fewell, and someone who cared more about his music than about himself.

The role of Luther Gray is less dominant, but he equals the subtlety of the two other musicians, accentuating, emphasising, supporting and driving forward.

The music itself is light-textured and varies between experimental pieces, such as "Mystery Intention", on which the trumpet growls, the guitar is played with a bow, and the drums offers a myriad of little beats, to more thematic compositions, such as "Invisible Resonance", on which Campbell shows his admiration for middle-eastern sounds, as he did before on his "Akhnaten Suite", but here it shows his technical limitations within the typical arabic scales, and Luther Gray seems a little bit at a loss here. Anyway, this is but a minor thing, because most other tracks are of a high level, both in terms of technical quality and emotional power, with my preference going to the opening track "Something Will Come Of Everything".

Soulful trumpet, precise and emotional guitar-playing and effective percussion is what you get, and in spades. All three musicians shine on this album, and the more adventurous, the better they get.

Fans of Fewell and Campbell should not miss this one.

A wonderful album, almost worth the price of entry alone for "Something Will Come of Everything." I'm rather fond of "Invisible Resonance," too.

Mark said....
a sublime recording that displays the essence of two lost masters and one who remains with us. Beautiful, beautiful music