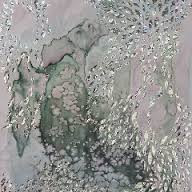 I've been mesmerized by the fearsome math rockers Ahleuchatistas. The North Carolina based guitar/drum duo of Shane Parish (guitar) and Ryan Oslance (drums) deliver some carefully constructed progressive music, leaning toward the heavier rock side, but still balanced tunefully with space and melody. I had been listening and following along, but somewhere in these carefully constructed twisting passages, I lost count and decide to just go with its flow.

As the collective brain of Wikipedia has it, "math rock is a rhythmically complex, often guitar-based, style of experimental rock and indie rock music that emerged in the late 1980s" - which is why I suppose I am thinking a bit about King Crimson as I listen - "it is characterized by complex, atypical rhythmic structures (including irregular stopping and starting), counterpoint, odd time signatures, angular melodies, and extended, often dissonant, chords."

And that's pretty much what happens here, in fact on the opening track you can hear a puzzle being built, with a catchy looped riff and the drums connecting in unexpected ways. To my ears the duo is far greater than the sum of its parts. Building over loops and tricky rhythmic patterns, the tracks move from the driving (Sundowning) to the anthemic (La Faena) to the prickly (also LaFaena) to metal (Power With) to the down right unusual (Shelter in Place). The precision of their shifting patterns however does not fall into a rut, and the ever morphing patterns keep the music ever in motion.

I never thought I'd take to this type of music, something about the genre seems cold, but Arrebato is an incredible listen - the Ahleuchatistas certainly know how to add it up.