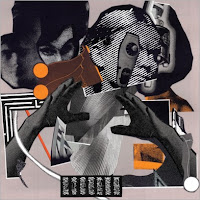 Family Vineyard, we thank you. For whatever part you had in gathering these players together. For packaging and distributing this piece. Often, fans of jazz and its many tentacles are spoiled. Never so popular or engaged by the public as other genres, it continues to produce not only competent players but virtuosos; and, given its concentrated talent pool, said players often end up in the same room. That said, there are special units and there are special units.

Yes, you’re reading this correctly. Akira Sakata and Jim O’Rourke (living in Japan for years now) united with the superhuman rhythm section of Darin Gray (double bass & percussion) and Chris Corsano (drums) also known as Chikamorachi. And because that much power and royalty apparently underwhelmed, they also invited Masami Akita, the electro-noise-nik known simply as Merzbow. Recorded at Dubplates & Mastering in Berlin in 2014, Flying Basket is indeed a behemoth, but perhaps not the behemoth that you might expect. True, in physical wax form, it takes two records and four sides to completely encompass its nearly 72 minutes. Yes, it’s at times predictably volatile. But, to start, my recommendation is that you attack the piece digitally. Is it worth splurging for the physical LP? Of course. The sound is fantastic; the packaging, superb. But having listened to the piece – a single, monstrous jam – without the interruptions of side flips and needle placements, it’s hard for me to go back. And it’s not my own impatience. It’s the disruption of the record’s immaculate pace. Small disturbances can seem canyon-like when the players are in the midst of reloading for their next eruption or letting Sakata explore in his decisive and rhythmic lines.

We get Sakata nearly solo for almost five minutes. Cymbals creep in after portions of the ensemble alternate attempts to scratch into the piece, small tugs, children-on-the-sleeve-of-a-parent tugs. There is no real low end for almost seven minutes. Sakata is persistent and pristine throughout, beautiful even. As a group rumble takes form, Sakata remains completely composed, the center of these centrifugal movements. It is in this initial sweep that Merzbow makes his machines heard. The clicks and hisses threaten to overwhelm Sakata's horn, the bones of the movement upheld through the hornsman's experienced shifts and swift runs. It proves a victory for humanity, cliche as that reads. Programming can compete with composition but seems almost inept when set against the improvisation and free association of the mind, even fed through fingers and lungs and lips. Of course, to be fair, this is Sakata. At fifteen minutes, all components - and especially O'Rourke's guitar - are fully integrated in a full on maelstrom. For a few eruptive minutes, the savagery continues. Midway through the eighteenth minute however, the piece cedes to feedback, signaling the end of the initial sonic sun flare. Bells spice the feedback, as they had with Sakata's original deployment. A minute later, there is near silence. On wax, this would signal the transition of "Part I" to "Part II". But, as I said above, it's near silence, not complete silence. Sure, it's almost peaceful, but wax flips are disruptive even to more meditative moments and this "peace" is the peace of a haunted house.

Eventually, Merzbow's sonics transform this calm into something more laboratory-like. But it doesn't stop. In fact, the "break" doesn't give for nearly eight whole minutes. And even then, scratching strings and Corsano's kit raise the temperature only ever so slightly. Sakata returns near the album's midpoint - spiced by Corsano - and he's now on clarinet. For a few minutes, everything is slightly more jovial. Like it took the two nearly half-an-hour, but the giddiness of rediscovering the other's music finally prevails. Corsano's rolls have a special excitement. Merzbow returns with some "water" for these bones. A stock is rendered. It's reduced. And the ingredients begin to add themselves once more. Many things are masterful here, but perhaps none more so than the patience. The players seem to take quick turns tasting the stock. A pinch more here, a dust there, and some of that more fluid, more lovely Sakata. Until, at 36 minutes in, it's just him for a few staggering weeps.

And we’re halfway through.
In the opening moments of the piece's second half, O'Rourke presents his own take on the blues, dismantled and stretched until its joints crack. Merzbow accentuates with notes that sound as if they've come from a field recording of a workshop. Around 44 minutes in, Corsano attempts to push the pace. O'Rourke, however, is resolute. This dissonance would be enough, a near perfect balance, but Sakata returns and erects another sonic sculpture on this landscape. As it did earlier in the piece, Sakata's playing invigorates Merzbow into a chase; again, a losing cause, as Sakata's creativity is simply too much for a machine, but a chase with enough hands to grab the rest of the band and pull them into another eruption. O'Rourke is particularly inspired. In fact, it is his playing that finally forces Sakata into an about face. Anyone familiar with O'Rourke's work with Keiji Haino and Oren Ambarchi may have seen this coming. Yes, he plays bass in that ensemble, but the man obviously takes notes. The burst is short though; and minutes later, it's Sakata alone again.

Each time Sakata solos, it seems the exact right treat at the exact right moment, but it's this five minute solo that brings us to the doorstep of the hour-mark and truly makes you crave the room. To see this bit of music in person must have been special. In the album's final thrust, Merzbow makes his presence more belligerent than at any other point on the record. And, with just over eight minutes remaining, a voice appears. It’s Sakata, and he’s screaming. In the liner notes, he is credited with playing the alto sax, clarinet and "throat." I couldn't reduce his violent howls to any one descriptor any better. Family Vineyard's site also nails its description of O'Rourke's playing in these final furious minutes, saying that he "bleeds his guitar of all melody." Sure, an end-all explosion where all players sound like they’re trying to melt their instruments is a tad predictable, but no less expected than Sakata showing up to these sessions with a horn. Point being, it’s just better than other explosions. Even if the others weren’t titans in their own rights - not to diminish their contributions – this would be worth grabbing. It’s almost incomparable to hear a monster like Sakata begin the final movement of a 72 minute piece with a solo so beautiful before screaming a lung out and laying the whole damn thing to rest. If you’ve got an hour and then some to spare, grab a drink and let this thing do its work. Hell, make time for this. You can even keep the drink. It may take an hour to hear his actual voice, but Akira Sakata is calling, and you really should listen.
Paul on Wednesday, November 18, 2015
Share