An interview with Survival Unit III 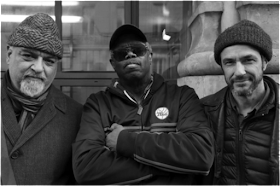 Freejazzblog: Straylight is the fourth album with this line up. How is it different from the three albums before? I noticed that you use the soprano compared to the previous albums and that Fred is on guitar. Was that a conscious decision or was it rather spontaneous?

Joe McPhee:  I like the soprano with this. Sometimes it’s a tactical decision, which saxophone do you wanna take to the airplane because once one of my instruments was almost destroyed since the planes are getting smaller and smaller. But it was a very conscious decision because I love the sound and I wanted to have it right there. I also have a plastic saxophone and sometimes I threaten these guys to use it.

Freejazzblog:  The new album also celebrates the band’s 10th anniversary. It’s a rather long-lasting concept, especially in free improvised music. Why are you still interested in playing with each other?

Joe McPhee: It’s a long period of time but we haven’t had so many concerts. So of course I am interested in playing with this band.

Freejazzblog:  Do you see a certain danger that the music might repeat itself because you know each other so well? Derek Bailey, for example, once said that real improvisation is only possible if you haven’t met before.

Michael Zerang: As much as I love Derek Bailey I don’t think this is true. To me this kind of distinction - improvised/unimprovised - is something from the past.

Freejazzblog:  Would you say that there are certain routines that the music can even benefit from?

Joe McPhee:  We don’t have any routines, we don’t see each other often. so everything is always pretty fresh.

Freejazzblog:  Are there formal or structural principles the band is based on? Maybe as to sound?

Joe McPhee: Integrity. One of the things I like most about this band is that everybody has its own thinking about the music, everybody is very honest about this thing. I always try to do the best I can when I play in this band.

Fred Lonberg-Holm: Michael and I are something like an old couple. I still remember when I heard him before we actually played together. It’s different with Joe, it’s like a game with certain marbles, it’s not like “Oh, I am so happy to be in that game“, I mean this is fucking serious. I can only speak for me, but I always try to give one hundred percent, tI try to take it seriously and do the best I can and hope that it makes sense, for me and for other people, too.

Freejazzblog:  Was the band culled from the Brötzmann Chicago Tentet?

Joe McPhee: Not really. The producer of the label wanted it to be that way. Fred and I had played around 2000 in two shows and Michael brought a perspective to that group that - for me - was really fresh because there is some kind of jazz drumming and another kind of percussion - and I thought, that’s good, man.

We arranged our first recording and some days before the recording should happen it was cancelled. But a little tour had been set up and we played in Chicago and it was very interesting. The first concert was called “Barrel Street Blues“ (dedicated to Ornette Coleman) and it was really great. From the first time we played it just worked, for me and I think for Fred and Michael as well. And then a European tour was set up.

Michael Zerang: Playing in the Brötzmann Tentet just made the logistics easier.

Joe McPhee: Sometimes we have guests, but there won’t be a Survival Unit IV. (laughter)

Freejazzblog:  Survival Unit III is the third project under that name. Why have you revived this platform and what are the differences to the previous bands?

Joe McPhee:  First there was an alto trio, alto saxophones and alto clarinet, but I didn’t like the name Joe McPhee’s blablabla, whatsoever. The first Survival Unit was me, I played along with pre-recorded tapes. And sometimes I just played music in a bar for what was called a drink down, where the bar owner would take every bottle of whiskey on the bar and poured it into a big pitcher and you were allowed to drink for free. So it was really a survival thing.

Survival Unit II was when bass players for some reasons refused to play with me. One of them literally grabbed his bass and walked off the stage saying “This is not real music, I have nothing to do with this shit“ and walked away. This was 1971. Then I had a concert in New York, I still had no bass player. In 1972 we had a recording for Public Service Television and there still was no bass player and then the drummer said: "I know this young guy in Philadelphia" And I asked: "How old is he?" "He is 21."  "Forget it", I said. The bass player I refused to have was Stanley Clarke. (laughter)

Freejazzblog:  In which way is the Survival Unit a combination to literally survive? How has music helped you to survive? Has it helped to survive economically and spiritually?

Joe McPhee:  As a matter of fact it’s about that. We will survive, we’re doing the best we can.  It’s beyond word, it’s pure love.


Michael Zerang:  For me being on stage is surviving. Every moment you don’t know what’s going to happen. It makes it more than spontaneous music, it makes it a life-or-death thing. I don’t think this music is easy to play. I think it’s demanding moment to moment to moment. To get through a set, to get through a tour, to get through ten years, that’s not a small feat. Some guys I play with, things go really smoothly, you know what you have to expect, but this here is different. I wouldn’t call it difficult because it’s not the right word. It’s always been demanding and …

Fred Lonberg-Holm: For me and the people who care about this music it’s about playing against the people who are trying to stop us, and the culture in general. It’s one model, one example how people can work together, and be serious together and accomplish something more meaningful, something which is beautiful and of importance.
Paul on Thursday, November 05, 2015
Share

Very nice Martin, thanks for 'pulling out all the stops' so to speak!