Rodrigo Amado - This is Our Language (A Double Review) 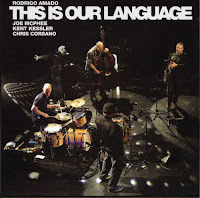 One recent September evening, my ears mostly deafened by the muscular performance of London Ontario’s legendary noise progenitors The Nihilist Spasm Band, I floated towards the bar and ordered a beer. Joe McPhee, who had guested that evening on pocket trumpet (and styrofoam cup) materialized to my left. I immediately introduced myself and gushed praise about his new release This Is Our Language on Poland’s venerable Not Two label, which I had received only a week or two earlier. Mr. McPhee’s eyes widened. “You have that?!” he asked incredulously. “I don’t have a copy yet. I’ve been on the road though, so maybe it’s waiting for me at home.” I explained that I’d been captivated by the beautiful album art on Rodrigo Amado’s website (www.rodrigoamado.com - who’s as capable a photographer as he is a musician), and had purchased it directly from label head Marek Winiarski.

The classic idiom, “Don’t judge a book by its cover” does not apply to this album. Even a cursory glance at This Is Our Language would stop a casual reader of this blog in their tracks. There’s clearly something special on offer here. A crisp block white typeface - the kind favored by Peter Brotzmann - announces the album title over a largely black background. The four musicians (leader Rodrigo Amado on tenor saxophone, Joe McPhee on pocket trumpet and alto saxophone, bassist Kent Kessler, and drummer Chris Corsano) are spotlit in a sparse, gentle yellow. The four figures are concealed and not immediately obvious - much like the ideas contained on the disc.

This Is Our Language is a natural extension of the similarly titled This Is Our Music by the Ornette Coleman Quartet (Atlantic, 1961). Amado’s group enjoys the same clairvoyant chemistry as Coleman’s did, and are no less equipped to deliver their message. Amado et al. summarize and expound upon the fifty-odd years of achievements in free jazz that have passed since Coleman’s opus. Ken Burns’ 2001 PBS miniseries Jazz may not have adequately covered the scope of this criminally neglected sub-genre, but fourteen years later, Amado has.

The album opens with Amado and McPhee slowly interlacing phrases in the aptly titled, ‘The Primal Word’, a sedate soundscape which mirrors the mysterious aura of the cover. Interactions liven with the inclusion of an inquisitive Kessler at the two-minute mark. ‘This Is Our Language’ begins with McPhee playfully imitating a swanee whistle, and Corsano leads us gracefully towards incendiary statements from both McPhee and Amado. The two summon the melodic auras of Don Cherry and Ornette Coleman while maintaining their own modern, pointed attacks. McPhee bubbles with youthful and joyous creativity, vocalizing into his horn, his moans blurring into smeared notes. The disc’s final track, ‘Human Behaviour’, draws on the duo interplay of McPhee and Amado that began the disc. At this point the group’s sound has blown wide open and the mystery is revealed, Kessler’s strings buzzing against the fretboard earnestly and without abandon. McPhee appears a final time delivering at first ringing, almost stately lines that eventually dissolve into spiraling, sonic spurts.

Lisbon’s Rodrigo Amado has chosen a crack team of improvisers with whom to present his vocabulary. With This Is Our Language, he has succeeded in uniting the varied parlances of creative musicians around the world. Over the span of forty-three minutes, Amado has condensed a diverse array of concepts that blossom and mature with each listening. This is a commanding and authoritative recording that should not be missed.

This band has a long story. When Rodrigo Amado was  organizing two concerts associated with his photo exhibition at Museu da Electricidade, he decided to fulfill a long-standing wish.

For the opening, Amado played with his Motion Trio (Miguel Mira on cello and Gabriel Ferrandini on drums), augmented by Carlos Zíngaro, Rodrigo Pinheiro and Joe McPhee.

For the second concert, Amado conceived  a project that could also be taken into the studio involving McPhee – a strong influence – but since context is important, the other musicians were crucial. He chose Kent Kessler on bass as he’s  always  grounded and can  add a powerful groove, even “when things get radically abstract“, as he put it (he'd formed part of Amado’s earlier trio with PNL). And Kessler has known McPhee from the Brötzmann Chicago Tentet and Brötzmann’s quartet with Michael Zerang. If Kessler was the earth, Amado also needed someone who was the air, someone “to unbalance things, an acid element“. He chose  Chris Corsano, one of the most exciting and inventive drummers on the scene, who’s  been playing with McPhee in a splendid duo for a number of years.

As with all Amado’s music, the album is completely improvised, with no prior discussion. This Is Our Language starts with the drum-free  “The Primal World“ opening with Amado’s tenor, joined almost immediately by McPhee's alto. The pair slowly weaves an abstract blues pattern until Kessler's bass walks in. From there on the track retains a beautiful, balladesque atmosphere, with shades of “Round Midnight“ towards the end.

“Theory of Mind (for Joe)“ is a classic saxophone trio. Amado said that he started a tune with Kessler and Corsano and after very intense playing he kept creating spots for McPhee to come in. But he just watched the others and listened, with the kind of concentration that  felt as if he was playing with them – a silent contribution, hence the title “Theory of Mind, For Joe“.

The other three tracks are classic quartet pieces, sometimes with McPhee also on trumpet and driven by repetitive saxophone riffs (“Ritual Evolution“), sometimes presenting highly energetic high speed playing generating  exciting duos and solos (“Human Behaviour“, “This Is Our Language“).
The title of the album apparently refers to Ornette Coleman's This Is Our Music from 1961(with Coleman on alto, Don Cherry on pocket trumpet, Charlie Haden on bass and Ed Blackwell on drums) and In All Languages (Caravan Of Dreams, 1987), since both albums have deeply influenced Amado’s music. But then again Amado and McPhee are also familiar with the musical language of John Coltrane and Albert Ayler, obvious influences. Additionally, Amado stated that beyond the Ornette homage, the title is also “a reminiscence to the language of improvisation and to the absolute miracle that is to share a common and abstract language with other musicians and with it be able to build coherent forms and meanings - a language that is both common but also built from the highly individual and personal languages of each musician.“

In the end, the players selected were perfect for the music. McPhee and Amado have a similar approach:  both draw from tradition, the avant-garde and improv, and the result is a sensitive and expressive album

The album is available from www.instantjazz.com and www.downtownjazzgallery.com.
Paul on Friday, November 06, 2015
Share

Good to see a double review of this album, that (IMHO) deserves all the credit it can get. My favorite release of this year so far!