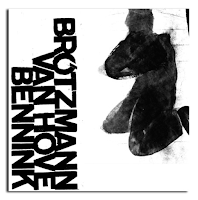 By Martin Schray (with some help from Colin Green)

Peter Brötzmann’s seminal trio with Belgian pianist Fred Van Hove and Dutch drummer Han Bennink, which ran from 1970 to 1975, is well-documented. There are four albums by the actual trio (Balls, FMP 130, Outspan No. 2 and Tschüs) and four more if you also count the albums on which Albert Mangelsdorff augments them on trombone (Outspan No. 1, Elements, Couscouss de la Mauresque and The End). Is there a good reason for a further album from that period? Well, it‘s always great to get “new“ material of one of the best European free jazz trios of all time, and the album‘s a missing link between Balls and FMP 130 (the 1971 albums Elements, Couscouss de la Mauresque and The End include Mangelsdorff).

1971 is a compilation of a 26-minute live track recorded at the legendary Burg Altena festival, hitherto only available on a hard to find LP sampler: 2. Internationales New Jazz Meeting Auf Burg Altena (JG-Records, 1971) and two previously unreleased tracks from recordings made shortly before the festival gig at the Radio Bremen studios.

It‘s also an albumtypical of the trio, whose governing dynamic was three very different musical temperaments clashing into each other. In particular, “Just For Altena“, the live track, is classic, iconoclastic, played-to-pieces stuff with all its advantages and disadvantages (for example: it was difficult for Van Hove to prevail against the two power players). Bennink proves he is a drummer who‘s not interested in smooth transitions but in abrupt interruptions, definite solutions and harsh accents. He structures the piece with abrupt stops and sudden changes, from massive cymbal work to his huge additional set of percussive instruments. At that time he was famous for his varied arsenal with all kinds of flotsam and jetsam augmenting his traditional kit – including the floor and the walls of the room – quite literally, his playing was off the wall. He‘s not preconceived or arbitrary, however. His distinctive qualities are intensity and quick, accurate responses to the contributions by Brötzmann and Van Hove. But despite Bennink’s brutal eruptions and the fact that there‘s still a lot of thickly textured power playing, the track still leaves considerable space for Van Hove’s delicate and harmonically intricate work. In contrast to earlier recordings by European free jazz bands, this trio opened up for a number of solos and duos, especially between Bennink and Van Hove. Although Brötzmann is better known for introducing the “aesthetic of screaming“ into free jazz (as Ekkehard Jost puts it in his very good book Europas Jazz (Fischer, 1987)) he was also a mediator between the two extremes Bennink and Van Hove represented. Of course, there are his notorious overblown passages and his emotional outbursts,  sometimes at the threshold of pain, but there are also almost hidden, blurred quotations of shanties, military marches and traditionals (“When the Saints Go Marching In“) and even some tender moments - something more to the fore in his current playing. In general, you can recognize a tendency to transparency, contrast, respect and structural distinctiveness in the trio’s playing,  despite the collective ecstasy and emotional intensity: In other words, the band developed its own distinctive style.

This development is even more apparent in the two studio tracks “Filet Americain“ and “I.C.P. No. 17“. “Filet Americain“, a Van Hove composition, is more a sound excursion by the band’s standards. Van Hove at the prepared piano comes to the fore and includes new music allusions, delicately supported by Bennink on all kinds of additional material. Then again, after a short Brötzmann interlude, the Dutch eccentric is ready to end the piece with a hefty drum solo on his regular kit. It’s a different version compared to the one the trio recorded on Balls but there are similarities in the sound and form of the piece, and is further proof that free jazz can be well structured in spite of its focus on improvisation.

“I.C.P. No. 17“ starts with a reed battle between Brötzmann and Bennink, another distinctive feature of the trio (Bennink is an amateur on these instruments and approaches them with a musical curiosity he regards as perfectly legitimate). The track also highlights a more sonic side to the trio – again with Van Hove playing very melodic lines to contrast with the reeds’ abrasive sounds.

In a nutshell: the album fills an important gap in the Brötzmann discography, looking back to where he started and forward to some of his current playing.. It‘s also a very good, rock-solid, classic European free jazz album, to be enjoyed by anyone interested in this kind of music.

1971 is available on CD and you can buy it from www.instantjazz.com and www.downtownmusicgallery.com.
Paul on Monday, November 23, 2015
Share