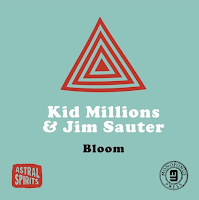 Let's try and contextualize the rhythm a bit: Earlier this year, John Colpitts, the superhuman drummer known simply as Kid Millions, released an album called The Sanguine Cadaver.  Released on cassette, each side supported a single track; and while Side A's piece is definitely worth checking out, it's Side B's For Jerry that makes the cassette worth parting with some of your money.  It's something that many of us have yet to hear on record: Kid Millions obliterating his kit, in complete solitude.  And the 24-minute solo drum bombardment would be more than enough, but add to this the fact that the Kid begins to moan along with his spastic and serpentine patterns, creating a listening experience that is - in every sense of the word - quite spiritual.  I bring this piece up for two reasons.  One, I'm assuming that if you're currently viewing this site, you hunt for more in music than radio force-feedings and streaming comps.  And two, as I mentioned above, acquiring this bit of homework - aside from being an ear's delight - helps to better appreciate the following.

A follow-up to last year's Fountain (released on Family Vineyard), Bloom, once again, unites Millions with the fire-lunged Jim Sauter.  To start, it must be noted that this release is yet another gem from Austin-based Astral Spirits.  Seriously, I can't heap enough praise on this "tiny" tape label.  For an operation with, no doubt, limited means, they manage to continually dole out quality releases that have blood to spare.  Bloom is no exception.  In fact, it is, in my opinion, the duo's finest release to date.  As Matthew Grigg mentioned in his review of Fountain earlier this year, the record "never [felt] consistently as revelatory as the duo's debut; something possibly attributable to the former's higher risk live concert setting vs. the higher fidelity/lower risk nature of [the] studio session."  Bloom suffers none of these pitfalls.  For one, much of the material was recorded live.  In addition to which, the duo has simply tightened as band and, with the acquired intimacy that comes from more and more sessions and shared stages together, has grown in ambition to match an already stratospheric scope to the music.  Also, whereas on Fountain, Millions could at times "[pull] the sax along with excitable eagerness" (noted by Grigg), on Bloom, the drummer's tornadic approach to his kit serves more to levitate Sauter's expressive horn than simply drag it into the inferno.  Much of this may also owe to how the recording is mixed.  More on that in a bit.

Ram Wing leads you into the album like its guiding you into a nightmare, quietly.  Its pace and volume startle.  Sauter blows long, sonorous notes: the path through the mountains.  Millions stings his kit: the stones tumbling from the rock faces.  Hombre Secreto finds Sauter expanding and scarring the road.  I could never convince my mother that this was beautiful music, but perhaps you'll follow me through this imagination.  Millions distorts a brief pattern and Sauter follows with two quick eighths, a 'Let's go,' in exhales.  All of a sudden, you're surrounded by something more primal, a series of notes like protectors of these mountains, heavily armed, and they're not quite certain they want you there.  Millions elevates Sauter by mostly laying off his snare.  Toms and cymbals raise the saxophonist and embolden him.  The lack of threat from his counterpart allows Sauter to expand and darken.  Relistens invite changes of volume here.  At a more normal, less earsplitting setting, Sauter's ferocity materializes but the aforementioned beauty remains.  With the sound cranked, Millions' patterns are more easily distinguished but Sauter's parts may begin to task your nerves.  The thrill becomes the duo's invitation: you, the listener, are allowed to become a member of the ensemble.  It's a Choose-Your-Adventure luxury that many albums don't cultivate nearly so well.  And it's fleeting.  Two-thirds of the way in, Millions finds his entire kit and the duo makes the decision for you.

Annapurna is longer than the previous two tracks combined.  It's also the song that unleashes the duo's real furious momentum - especially concerning Sauter's use of amplified saxophone, to which he adds a multitude of effects.  Says Millions of Sauter: "I think Jim's playing is in a class of its own.  There's nobody out there who can can touch what he does.  It's [actually] very refined.  Hopefully, I'm a good foil for him."  In an interview earlier this year, Millions went on to say that, " ... it's very hard to keep up with Jim's energy so I'm [on Bloom] just trying to bring as much energy as I can to the project.  Whenever we play, I have to be at the top of my game.  I can't really be too intellectual when I [play] with Jim.  I just need to be as aggressive as I can, but keep it musical."  That's Annapurna.  Period.  It's not that it lacks or defies intellect.  It just doesn't become academic.

A third of the way through Cock a Snook, the Kid ignites his cymbals, pushing Sauter's fully-effected horn further skyward.  Later, when Millions' kit attempts to ambush and overwhelm Sauter's attack, the elder player responds with a series of notes so shrill and intense - nevermind the patterns - it approximates the sound of a violin dying in a fire.

Black Swallower mounts another intense rush and One for Diz takes us home with a tasty "groove."

In an interview with the Houston Press, Millions described the music:

Odd to say this following so many spins of this furious album, but it's refreshing.  Refreshing not only to hear a musician downplay his music's niche, but refreshing to hear him downplay (see above) its general intellect.  And certainly some jazz purists will wonder if it's "jazz" enough.  But no one should wonder about its freedom.  While the Kid and the elder Sauter may not take themselves too seriously, it is some serious and seriously good music.  Serious music fans take note.