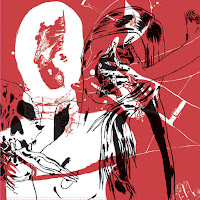 
With the three unusual musical thinkers involved in the group of 'Premature Burial' you can be quite well assured that their music is nothing typical.

The folks at work here are Peter Evans on piccolo trumpet, Matt Nelson on saxophone and effects, and Dan Peck on tuba and effects. Evans' work is well known to readers of this blog (we most recently covered his hard hitting Pulverize the Sound), Nelson is a member of the unique Battle Trance tenor saxophone quartet and Peck had been delivering outstanding tuba to free jazz efforts with increasing frequency.

The inspiration for this particular trio is drawn from an Edgar Allen Poe story whose narrator suffers from a fear of being buried alive, and the title of the album, Conjuring, in reference to a recent psychological horror movie of a haunted house. The music, accordingly is meant to (and successfully, I believe) evoke stages of paranoia and the feeling of entrapment, helplessness and futility.

The music - if that's an appropriate term - is more an onomatopoetic dissection of the psyche than a set of songs. Electronics blend and twist the three wind instruments and the combined sound is used to describe the mental state of the protagonists. What could also be easily, if judging by the cover and title, confused for a hardcore album however is considerably more musically nimble. Eschewing a sludgy and distorted approach the trio uses the sounds of their instruments to evoke the chatter of the mind, and the terror of these cataleptic condition. At times the sounds mimic the human voice or like R2D2 being hit by a laser beam, while at other times clear melodic statements rise to the top. Through contrast and careful construction, their sound sculptures are captivatingly menacing and beautiful.

The Conjuring is not for the listener who wants an obvious melody or even a well formed Ayler-esque cathartic scream. This is something new, different, and mesmerizing.


Nice review that makes me want to hear the music but

"The music, accordingly is meant to (and successfully, I believe) evoke stages of paranoia and the feeling of entrapment, helplessness and futility."

sounds like a barrel of laughs. A good uplifting listen after a tough day :)

Very visceral music. I could add "but leads the listener to a catharsis, an awakening of the senses."