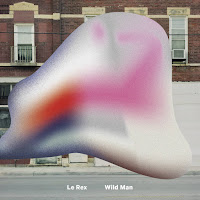 Swiss quintet Le Rex brings their music to the people—literally. According to their website they like to record in public places like “department stores, farms, construction sites,” and even “scrap yards.” This preference seems in keeping with the spirit of their low-maintenance and portable all-acoustic set-up. From the top down we have Benedikt Reising on alto sax, Marc Stucki on tenor, Andreas Tschopp on trombone, and Marc Unternährer on tuba, plus Rico Baumann on drums. Having recorded their first two albums all over Corsica and Switzerland, the group followed up their US tour with a sojourn in one of the centers of free jazz, Chicago, to make Wild Man. The music on this latest effort bears the stamp of a wonderful variety of influence and inspiration, from New Orleans second-line and the AACM to Swiss clockmakers and alpine dwarves. There’s even a track in celebration of Richard Kiel, the actor who played Jaws in the James Bond movies. All this is to say we get everything we’d expect—and more—from a band called Le Rex on an album called Wild Man: playful, energetic music free of self-serious pretentions. Or as they themselves describe it, “a kind of cunning adventure jazz.”

Piece by piece, and even within individual pieces, the adventure unfolds as a series of constantly shifting stylistic strategies, with a dedication—and ability!—to groove that both grounds the listener in each moment and dramatizes each redirection. In other words they keep us on our toes, mixing things up just as we’re getting comfortable. Naturally a lot of this work falls to Baumann, who’s more than up to the task. Take for example “Home Alone,” which spends its first half pushing and pulling us back and forth from full to half-time feels without falling out of the pocket and then launches into a slow, snare-dragging march—all in two minutes. Or “Don’t Lean on the Case!,” inspired by the words of a docent at the Art Institute of Chicago, which somehow takes us from a driving sixteenth-note hi-hat groove into a sort of Afro-Cuban 6/8. In other places we find hard-swinging second-line just shy of overdone (“Dwarf”), festive calypso with some infectious unison playing (“Riff Raff”), or flirtations with tender balladry (“Hymn to the Cold”).

The overall effect is surprise that comes off as both sure-footed and spontaneous. This requires planning and a kind of selfless submission to the chart, but don’t think that Wild Man doesn’t give each member of the quintet the liberty to stretch out and explore. “Anchor” starts off with a moderate finger-snapping swing that gradually frays apart underneath a marvelously slurred and breathy tuba solo by Unternährer—but it doesn’t end there: over an accelerating rhythm section in the second half of the tune, Stucki pushes a furious solo into the upper registers. “Le Clic” showcases some more nice sax work, as well as a tasteful drum solo à la Roy Haynes. The album features Tschopp’s excellent trombone playing throughout; see the dueling solos on the free-leaning title track, or the open-ended introduction to the leaden swinging final cut, “Be in Shape!,” one of my favorite moments on Wild Man. They aren’t afraid to bury it late in the album—knowing, I suppose, that we won’t be able to stop listening before the whole thing’s over.