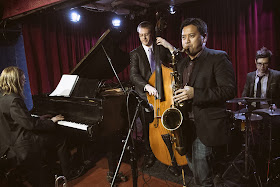 Everything that I’ve written in the review about Hannover rang even truer during Mostly Other People Do the Killing’s show in the small, intimate, and (somewhat) legendary club KSET in Zagreb. Despite Hannover being a really good record, witnessing the band in the flesh once again proved that nothing can replace the real/live deal.

It’s especially the subtleties that are lost when listening to Mostly Other People Do the Killing in the comfort of your home. The fine sarcasm, the hyperactive impulsiveness of Elliott and his cohorts, their body language, comic theatricality, and cheeky smiles - all elements that are somehow crucial to understanding what’s going on. Because when you see them on stage, their energy, humorous absurdity, and musical prowess dispel any accusations of “insults to jazz” that have been attached to their names during the years. What might sound like a cynical jazz deconstruction and mockingly ironic examination of jazz traditions on an album, during live shows mutates into a meta tribute filled with warmth and friendly banter. As mentioned in my review of Mauch Chunk, this kind of an approach would fail badly without love and deep understanding of the music at the hand.

For about an hour and a half, Mostly Other People Do the Killing guided us through all of bop’s prefixes, often touching upon swing, smooth jazz, Dixieland, and other styles, but always teeming with surprising progressions around Elliott’s themes. Collectively and individually, traveling from direct, mainstream-like passages to abstract, avant-garde rumpus, they create an air of ambivalence between relatively straightforward compositions and unexpected, sometimes manic detours. Their performance was focused on new tunes, some of them barely resembling themselves as if they were shattered and then pieced back together with improvisational glue and references from jazz standards, pop, and inserts from Elliott’s older compositions; an approach that made the whole setlist feel like a conceptual improvisation on a higher level. Watching the band on stage perform with such ease and zest might even push you toward understanding their much maligned experiment Blue, revealing its true nature - an honest tribute to Miles Davis’ quintessential release, but through the eyes of some wacky guys.

Witnessing Ron Stabinsky fit in with the band as a full time member was also one of the highlights of the concert. While it’s hard not to miss Peter Evans, Stabinsky does a fine job of replacing him, even on material originally written around Evans’s trumpet. Yet, his piano remains subdued at times, a bit stiff and timid in its attempts at breaking from the mold. These minor issues become most obvious during some of the quirkier, more interesting licks that appear only as short bursts when an extended, elaborated presence would have been welcomed. On the other hand, Jon Irabagon and Moppa Elliott profile themselves as the most adventurously inspired musicians of a pretty adventurous group.

There’s something captivating when the performers seem to enjoy themselves almost as much as the audience. A short talk with Moppa Elliott after the show confirmed that it was indeed a great night for everyone involved, with the guys preferring smaller, but feisty crowds. Moral of the story? Go see them if you can. More than mere entertainment is guaranteed.