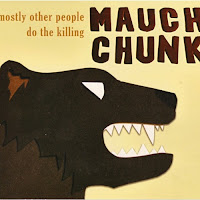 It’s not surprising that nowadays everyone and anyone has a usually quite strong opinion about NYC’s Mostly Other People Do the Killing, the ensemble led and directed by bassist Matthew "Moppa" Elliott. By crafting their style around honest and loving (a fact that many seem to miss!) deconstructions and pseudohomages to almost every genre from the history of jazz (which includes some sacred cows), they pushed themselves into the spotlight of mainstream crowds and, at the same time, raised some eyebrows between (free) jazz connoisseurs and aficionados. Just by perusing the reviews published on this blog, their mission is made simultaneously clear and unclear by the array of conflicting and dissenting opinions. Revered by some, despised and misunderstood by others, Mostly Other People Do the Killing’s approach and attitude puzzles and freaks out, revealing post-modern tendencies behind their superficial facets of mere entertainers.


That’s why Mauch Chunk is exactly the unexpected type of release that we’ve come to expect  from a band that continues to surprise even when they, like this time around, go exploring one of the most rehashed and tired of jazz subgenres: post- and hard-bop. It's largely thanks to the musicians' varied playing styles and approaches and Elliott’s intricate compositions that the band's well-known M.O. hasn't become stale even after ten years. The recipe that they follow appears to be so deceivingly simple. Take a page from the book of (classic) jazz and rewrite it with great care to follow some new, fresh narrative brimming with improvisations and quirky playing. Of course, remember to add a healthy serving of spontaneous and sincere humour (a fact that many seem to be irked by!) which is obviously (to me, at least) never a result of attempts at pandering to audiences. Mauch Chunk thus feels both like a return to roots for the band, revisiting stylistic locations in which their experimentations began, and a new beginning with pianist Ron Stabinsky taking the place of trumpeter Peter Evans as one of the four core members. This change, in turn, also resulted in a shift of Elliott’s compositions towards relatively piano-centered pieces.

Because of that, at first glance Mauch Chunk might appear as a display of the band taking a safer road than on some of their previous records, staying closer to those original hard-bop idioms and tropes, but the flow found just beneath the surface is as inspiring and joyful as ever. The seven short, compact compositions, named as usual after towns in Pennsylvania, are all carefully, intelligently thought out, each bearing a dedication to the individuals that influenced them, yet never feeling overwrought or unoriginal. Elevating the already solid compositions, Jon Irabagon, Kevin Shea, Ron Stabinsky, and Moppa Elliott all contribute their own sparks to the music with short quotations and wild, unpredictable references (I won’t spoil these), improvisational dialogues, and mutedly outrageous piano and saxophone solos.

There are as many variations in group dynamics as there are songs on the record. Jon Irabagon leads the way and veers on the edge of extended techniques on opening “Mauch Chunk Is Jim Thorpe” (dedicated to Henry Threadgill) before things completely fall apart and reassemble themselves. Jon Stabinsky flexes his fingers and counterpoints Irabagon’s licks on the ever accelerating and rolling, dissonant “Obelisk” (inspired by Dave Holland’s music). The whole group, lead by Shea’s drumming, toys with rhythms and time signatures on the bossa nova-infused “West Bolivar” (to Caetano Veloso), while the final “Mehoopany” tries to close the record on a dreamy, contemplative note, only to have Shea’s drumming, the single constantly disruptive element, foretell and introduce the ensuing chaos. In all of these cases, the music underlined by masterful playing never fails to captivate and reward, tickling the mind with the possibility of the material developing even further when performed live.

While Stabinsky’s first proper introduction also brings about an air of change for the group, with Evans’ furious playing replaced by more structured, toned down piano phrases, this is still the Mostly Other People Do the Killing we all know and enjoy. A hint of hidden, unrevealed potential within Stabinsky’s playing and Elliott’s evolving and expanding compositional methods are sure signs that we’ll yet be seeing lots of great stuff from these guys.