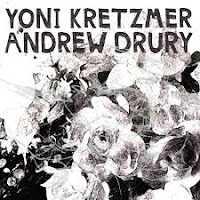 Not so long ago, we reviewed percussionist Andrew Drury's solo album The Drum - which showcased every single possible way to play a floor tom. We also covered Saxophonist Yoni Kretzmer's  2Bass Quartet album Book II recently as well, which is a spectacular bottom heavy two disc set. On this duo outing, Oranges, these two highly original artists interlock in an inventive improvisational dance that draws on a full spectrum of approaches and styles that highlights their instrumental prowess.

Track one, 'Akukash' emerges from a primordial swamp of sound and textures. Drury approaches the drums in unexpected ways, and Kretzmer's ideas slowly evolve, slithering from the sea and then growing and forming. 'Synaptic App' the second track, finds the two again working the edges of their instruments, Drury continuing to extend the traditional methods of playing a drum and Yoni approaching his tenor saxophone unfettered and free. However, these two tracks are simply clearing the palette for the main course: the sixteen minutes of bliss found on 'Evocations'. Here the duo catches fire, taking off the from earth entirely, and like two stars colliding, the song reaches an impressive point of implosion. Then, halfway into the intense fifteen minutes title track, just when it seems the musicians have almost nowhere left to go, the sax wails, and Drury begins dissecting his kit.

The duo's fearless and often fearsome playing is a joy to experience. Much credit to Kretzmer whose tenacity and exuberance takes the tracks often to a breaking point, and Drury who both matches the energy and introduces an entirely different set of sounds to the proceedings.