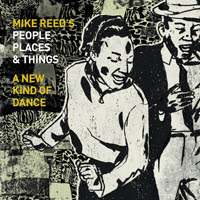 
Fueled by a jubilant spirit, Chicago drummer Mike Reed leads his long-time quartet, People, Places & Things, through a tight set of originals and covers. The core lineup, a pianoless quartet with Greg Ward on alto, Tim Haldeman on tenor, and Jason Roebke on bass, is most immediately reminiscent of Ornette Coleman’s quartet with Dewey Redman. Reed tips his hat to Ornette in the liner notes, but to my ears, it’s the ghost of Von Freeman who presides over this recording, especially when it comes to Haldeman’s classically warm tone. Style-wise, People, Places, & Things is in the tradition of Chicago’s unique brand of bluesy post-bop. Reed’s approach simultaneously draws from the past and pushes away from it, giving the group an updated postmodern sound.


Looking back through the blog archives, I see I’m not the only one who tends to prefer Reed’s originals to his group’s covers. The album kicks off with Reed’s “A New Kind of Dance,” a seemingly straight-ahead swinger masking Ward and Haldeman’s rhythmically dense solos. Matthew Shipp guesting on piano, as he does on a few others, and he, unsurprisingly, brings a fierce edge. On the gorgeous ballad “Reesie’s Waltz,” Shipp floats along with the rhythm section, effortlessly guiding the players in and out of his brief solo. It’s a nice reminder of both Shipp’s deftness and Reed’s collaborative approach, bringing in guests to drive the group to some interesting places.


“Candyland” cycles between melodic construction and freely deconstructed sections, with Ward and Haldeman playing parallel lines. Later on the album. Reed’s “Wonderland,” which features, for me, the album’s centerpiece collective improvisation, is followed by a wonderfully free take on Ellington’s “Star Crossed Lovers.” On all three, Roebke’s bass alternately anchors the group and sets them loose. This push/pull is the crucial tension that’s sometimes lacking elsewhere on the album.