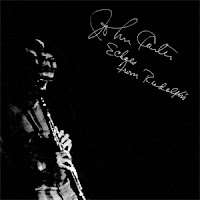 This has been a year of rescue and recognition for the late, great reedist John Carter. In addition to this release, a reissue of certified hen’s tooth Echoes From Rudolph’s, we’ve also been gifted a reissue of Carter and Bobby Bradford’s stunning Self-Determination Music, and No U Turn: Live in Pasadena 1975, apreviously-unheard concert recording salvaged by the excellent Dark Tree Records.

Echoes From Rudolph’s was the sole release on Carter’s Ibedon label, originally issued in 1977 in a scant edition of 550. Like too much of Carter’s music, it quickly went out of print, lost to all but the most steadfast collectors. The album (and the live performance included as a second CD) features Carter largely in a trio context with his son Stanley on bass and drummer William Jeffrey. Both recordings are firm assertions of Carter the instrumentalist, rather than the composer and bandleader. His virtuosity is the nucleus of this music, pushing at the limits of the soprano saxophone and clarinet, the two reeds he had increasingly gravitated toward in the years leading up to Echoes. In fact, according to Mark Weber in No U Turn’s liner notes, “Angles”—the solo clarinet midpoint of Echoes, recorded a year after the rest of the material—was Carter’s first statement after definitively choosing clarinet, which he would play exclusively from then until his death in 1991.

The title track is a blustery affair, Carter slurring and sputtering in the upper ranges of the clarinet, dragging the rhythm section along with him. Carter is all velocity, his supersonic runs adorned with trills and vibrato that seem to double the number of notes, his altissimo at the very edges of audibility, notes screeching into outer space. Stanley Carter and Jeffrey make a valiant effort to keep up, though there are moments when the three independent voices struggle to cohere. The rhythm section is a bit more effective later on “Amin,” with Carter the son locking into a furious walking bassline while his father’s soprano streaks above. “To a Fallen Poppy” is a moody moment to catch one’s breath, adding Melba Joyce’s haunting, echoed vocals and one of Carter’s other sons, Chris, on percussion. Closer “The Last Sunday” pits Carter’s dog-whistle soprano against arco bass harmonics and crashing cymbals: the sounds of men trying to take flight through sheer strength of musical will.

The second CD includes a previously unissued performance recorded in early 1977 at public radio station KPFK’s studio in Los Angeles, and is nearly twice as long as Echoes. The first track is a curiously languid and thin-sounding medley of “Echoes From Rudolph’s” and “To a Fallen Poppy,” the former like a zombie version of the album track: it’s up and moving, but oddly lifeless. Stanley switches to electric bass as the music segues into “To a Fallen Poppy,” and his introspective lines and Jeffrey’s slow tom rolls finally gel into an effective background for Carter’s melancholic lines.

The second track is even longer still, featuring four unidentified tunes that range from searing free jazz to wistful ballads before eventually closing with “Amin.” Thankfully, there’s much more life here. The injection of more solid rhythm seems to invigorate all the players, the music reaching its zenith during the third unidentified track. During the build-up, as Carter takes a long solo in the second piece, his high notes tax the recording setup, resulting in some bizarre tape distortion. But, rather than appearing as defects, they actually dramatize Carter’s intensity: how could some flimsy magnetic tape possibly contend with the vitality of his music?

NoBusiness is to be commended for resurrecting this rare music, and its efforts in working with less-than-perfect source material. Both Echoes and the concert recording suffer from some recording deficiencies, with the bass thrust too far up in the mix and Carter too far back, especially when the music gets turbulent. Listening with headphones improves the experience, particularly for the KPFK tracks. In all, an important document of Carter’s 70s work and of West Coast jazz history. Now let’s start getting all the Roots and Folklore records back into print!

Yes, the Point of Departure review is definitely worth reading, as well. It went up a few days after I submitted this one, and goes more in-depth into "setting the scene" for Carter's switch to clarinet.

Such a welcome reissue. As you said, Carter seems under-documented, as a player. His later compositional work is rightfully revered, but that kind of skims over the fact that he could play! Love these early records that give such a clear picture of what he was capable of.

The Roots and Folklore series seems like such a natural for Mosaic, especially since they did the Carter/Bradford Revelation releases, that I'm surprised they haven't pulled the trigger.