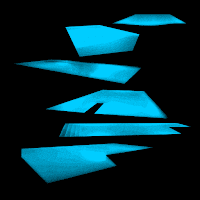 In 2011, Boris Hauf gathered a sextet comprised of three reeds (himself on tenor/soprano, Keefe Jackson on tenor sax/contrabass clarinet, and Jason Stein on bass clarinet) and three drummers (Frank Rosaly, Michael Hartman, and Steven Hess, with the latter also adding electronics). The results, released as Next Delusion, were surprisingly restrained. There were moments of abandon, sure, but the predominant mood was one of brooding calm. Listening to that record was like watching the still surface of a lake, a lake in which you just knew there was some unspeakably terrifying beast. Whether or not you caught glimpses of that beast was beside the point - simply knowing that it could appear at any time was enough to make you feel uneasy.

On the group’s new outing, also called Next Delusion, it’s immediately clear that something is different. The uneasiness remains, and the compositions are just as taut and tense as before, but the sense of danger has been amplified; the proverbial flood-gates have opened up and you have no choice but to get swallowed by the deluge. The first piece, simply called “Bleed,”opens with the synchronized plodding of the drummers. It’s a dense and hypnotic rhythm, and it helps draw us down into the world Hauf has built - a world of submerged rooms, windowless, with no access to fresh air. Eventually, the reeds join in, moving together in fluid lines. The air is getting thinner, however, and a sense of urgency sets in: soon, each player goes off in different directions, producing wild offshoots and branches that give the piece a web-like structure. While Hauf stuck to tenor and soprano on the previous record, here he employs the baritone saxophone - a terrific choice that deepens the sound, fills it out, but also gives a somewhat menacing quality to the ensemble. His tone buzzes, rattles, and cuts through the composition in a deliciously diabolical fashion. In contrast, the other players, Keefe Jackson and Jason Stein, help keep the sound from getting toobogged down. If not for them, the piece would run the risk of becoming a monotonous slog. As things stand, however, Jackson’s tenor and Jason’s bass clarinet give the composition a manic buoyancy that acts as a counterweight to the rumbling low-end.

The center-piece, called “Steps,” hearkens back to the group’s previous record. It’s airy and abstract, but with an undercurrent of electricity that is not dissimilar to the charged atmosphere you can feel before the coming of a storm. The percussionists trade in the pounding drums of the last composition for sounds that are more nuanced: clanging waves, sibilant cymbal-work, and unnerving rattles. The reeds ride atop this rolling river of sound, contributing in subtle ways.

The final piece opens with the drummers locked together once again, sounding out a tribal call to battle. It builds and builds and then disintegrates, at which point the reeds engage in a tangled dance reminiscent of the first track. They continue on in this manner, sometimes frenzied and wild, sometimes serene, and then the composition comes to a close. In all honesty, this short collection of music (only 26 minutes!) could have easily been stretched out by another half-hour or so. Hauf is working with some wonderful musicians here, and the sound is a tantalizing mixture of elements I would have been happy to explore further. In any case, I highly recommend this to people who are more interested in the “textural” side of free jazz. While there are some undeniably fiery rhythms here, the real beauty lies in the atmosphere - when listening, you feel like you’re being swallowed up and subsequently crushed in the belly of a great sea-monster. Coming as I do from the Gulf Coast of Florida, I’ve experienced my fair share of hurricanes. I’ll never forget the feeling of the storm’s central eye passing overhead; you can look up and see the stars, but you do so with the full knowledge that you’re surrounded by an unthinkably immense pressure. This record can be thought of in a similar way. There’s a lot of space here, but it’s never empty.