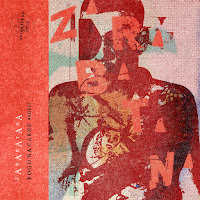 Even though Zarabatana’s Fogo na Carne was released all the way back at the beginning of 2015, it would be a shame to miss out on the Portuguese trio’s refreshing debut. Named after a blowpipe weapon, Zarabatana plays what the label describes as “a unique brand of ritualistic free jazz.” Live footage of the trio playing in paper masks seems to bear this claim out, as does all three members’ frequent use of a whole arsenal of percussion instruments, from tin cans and shakers to chimes and chromatic bells.

In fact the first track, “Mmória Doç (Intro),” consists entirely of percussion—densely layered and fluidly shifting rhythms—and it’s not until two and a half minutes into the second track, “Memória de osso,” that Yaw Tembe’s trumpet first appears. On this track and several others, bassist Bernardo Álvares is foundational in achieving the impressive effect of embracing pulse without resorting to recognizable groove. Here Álvares’s punchy bass drives everything forward, always just outside our grasp. By its second half the album’s nine-minute centerpiece, “Intro and Outro to Aleph,” falls into a similar approach, with Tembe sketching a lyrical melody over Álvares’s quarter notes while drummer Carlos Godinho keeps busy with his mallets on the snare.

Elsewhere Álvares prefers lush bowing. On “Chamusca Suse” Tembe responds sympathetically, drawing out long lines to layer over the textured bass before switching to percussion to help bring the track to its frenzied climax. But on “Sande Macaco,” the interplay between trumpet and bass is a bit more open, with Tembe worrying a boppish melodic thread while Álvares maintains a darker arco feel. Here we find the capricious Godinho at perhaps his most conventional (a relative measure), concentrating on his kit over his auxiliary percussion and extended techniques.

The sixth and final track, “Jamaca Juiss,” ends the album with another example of what I like most aboutZarabatana’s debut—their ability to remain grounded without lapsing into predictability. Here again for me Álvares is the key, plodding along with a spacious, not-quite blues while his partners weave in and out of the silences. Fogo na Carne, released by A Giant Fern as a limited edition cassette/download, is a short and sweet album—too short, perhaps. We’ll have to wait and see what the new year brings.