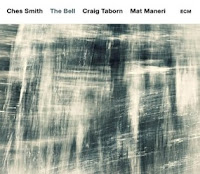 The Ches Smith Trio album that I'm waiting for is 'Live from Winter Jazzfest'. The two times that the trio has played at the NYC jazz festival have been revelatory. The first show, two years ago, was as I understand it, entirely improvised. This time, as a part of the ECM showcase, they performed the compositions, in sequence, off of their debut release 'The Bell'.

Over the intervening two years, the group has developed a decidedly atmospheric approach. During the 2016 show, Smith switches between drum kit, various percussion, and the vibraphone, Craig Taborn takes full control of the lovely Steinway grand piano and Mat Maneri, seated in the middle, runs his viola through several effects, giving the trio a rich tone. Live, they are true to the spirit of the album (or should that be vice-versus?) embracing the crystalline sound that makes something ECM.

Then, perhaps just to let those of us who saw them in 2014 that we are all in the right place, the group reaches a peak of energy and sound. The song is most likely 'Isn't It Over,' which is the third track on The Bell. Maneri plays an akimbo melody while Taborn shadows with a biting harmony. Smith, a master of rhythmic subterfuge, is creating pockets out of elliptical patterns, connecting in unexpected ways. On the album, and in concert, the mini-epic is spellbinding - a whorl of music that arise from seemingly nowhere.

It may make sense to loop back to the beginning at this point … the album starts with a pregnant five seconds of silence before a bell - of course - rings out. What follows is a quiet construction of the landscape, an awakening, as the piano plays an insistent pulse, the viola weaves strands of melody, and vibraphone plays a percussive role. Over the course of ten minutes, tensions and expectations are laid. In the follow-up, 'Barely Intervallic', the tension is released and the group begins shading in the blank spaces, and towards the end of the song were ready for 'Isn’t It Over', the aforementioned first catharsis of the album.

The follow up 'I'll See you on the Dark Side of the Earth' is a minimalist dreamscape that ends as a powerful rock song. Speaking of which, the track 'Wacken Open Air' must refer to the colossal metal festival held annually in Germany. The song isn’t that heavy, but it is dense, with stuttering rhythmic starts and stops and shards of melodies. In fact, Taborn and Maneri interact in almost a classical mode, while Smith provides texture until they all dip into a bit of the metal. At the WJF show, the group expanded this part, leaving some of the audience with jaws agape. The closing track ‘For Days’ is a nice summation of the album. Playing off of subtle, and not so subtle, rhythmic changes and unusual melodies, the group gives a little bit of everything that makes the album so engaging.

The Bell is a captivating series of dreamlike images of emotion and subconscious thought disguised as songs, and best taken in as a whole. If The Bell is the harbinger of what to expect from 2016, we’re in for an incredible year of music!