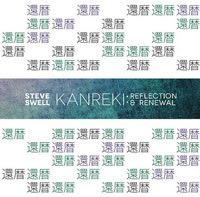 Steve Swell’s Kanreki. Reflection & Renewal is a double-disc offering from Not Two records, celebrating the musician’s 60th birthday with a variety of live performances, compositions, writings, and artwork. The result is uneven, as the music is pulled from different times and places and the modes and approaches are different.  However, it’s a grab bag tribute that offers up some real gems.

The opener is a thirty plus minute live track, “Dragonfly Breath: Live at Zebulon,” a furious effort that pummels the listener with a barrage of sounds, from Paul Flaherty’s sheets of sounds from his tenor sax, to C. Spenser Yeh’s Shrilling violin, to Weasel Walker’s battery assault of percussion. Swell’s clarion-like tone from his trombone leads the charge, heralding a cacophony of sounds that force you to pay attention. “Essakane” is decidedly different, a dynamite free bop track with a powerful front line of horns, Magnus Broo on trumpet and Ken Vandermark on tenor. Recalling the 60’s Jazz Messengers and 70’s Terumasa Hino led groups, the horn section — along with Joe Williams on bass and Michael Vatcher on drums — go off on a seven-minute excursion combining familiar hard bop notations and rhythms with bursts of spontaneous improvisations. A real stunner.

“Schemata and Heuristics for Four Clarinets” is a showcase for Swell’s more classical leanings, an eighteen-minute work that features the clarinets of Ned Rothenberg, Guillermo Gregorio, Miguel Malla, and Zara Acosta-Chen. It is a lengthy exploration of the tone and playing of the clarinet, from fast paced group synchronizations to slow, meditations. Overall it has a feel not unlike what is occurring in contemporary chamber classical, and that is a testament to Swell’s compositional skills. “News from the Upper West Side” concludes the first disc with a voice/trombone duet, Tom Buckner providing the voice. Eight minutes of abstract voicing and gurgitative horn playing.

The second disc begins with a Steve Swell solo: “Splitting Up is Hard to Do,” a mostly one-note affair that subtly changes tone throughout the eight-minute duration. It is followed by three tracks called "Live at the Hideout.” With Guillermo Gregorio (clarinet), Fred Lonberg-Holm (cello and electronics), the trio engage in sonic abstractions for thirty plus minutes. Your level of listening pleasure to these may vary, as the music seems to wander, being a touch too self-indulgent. Composite #8 features Darius Jones (alto sax), Omar Tamez (guitar), Jonathan Golove (cello) and James Ilgenfritz (bass).

Overall, Kanerki, Reflection & Renewal is a composite of works of varying quality and approaches that make it less cohesive than his other albums.
Paul on Tuesday, January 19, 2016
Share