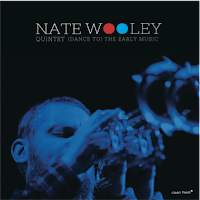 When Nate Wooley toured Europe with his quintet in the spring of 2014, he explained to audiences why he‘d chosen to play the music of Wynton Marsalis, having had to defend that decision to US audiences who‘d expected less “conservative” music. For Wooley, Marsalis’ early albums had been revelatory, and a huge influence. Notwithstanding his enthusiasm, European reaction was also mixed: not the “typical” Wooley music they’d expected. On closer listening however, this is typical Wooley music – a high level of technical facility, the subtle use of unusual chords, unpredictable, and occasionally rough round the edges. With Wooley, expect the unexpected.

For (Dance To) the Early Music he took eight compositions from three of Marsalis’ early Columbia albums in their order of release – Wynton Marsalis (1982) (one number), Black Codes (From the Underground) (1985) (four) and J Mood (1986) (three) – but made substantial changes. First, in the arrangements: Marsalis had a classic quintet/quartet with piano, bass and drums (and saxophone on the first two albums), whereas Wooley has Harris Eisenstadt on drums, Eivind Opsvik on bass together with Matt Moran on vibraphone and Josh Sinton on bass clarinet, which gives the music a rather different range of colours. In addition, Marsalis’ rhythm section provides a traditional supporting role – walking bass and swinging drums with a more or less steady pulse. In comparison, Opsvik and Eisenstadt are often brought to the fore, with the drums providing a more elastic beat. Last but not least, Wooley loosens up the structures. In general, Marsalis’ performances take the traditional head/solos/head form. On some numbers Wooley does the same, though naturally, the solos are different, but on others he takes a different direction. On “Skain's Domain”, he starts with a long, persistent, guttural tone, introduces the theme briefly then solos over static chords on the vibraphone, followed by a triple dialogue for trumpet, vibes and bass clarinet, which gradually unwinds as the piece comes to a close.

Marsalis’ early work invites parallels with Miles’ quintet of the mid-sixties (Herbie Hancock, Ron Carter and Tony Williams played on his first album) as well as the classics of bebop and hard bop. Wooley strips the tunes back to the bone, giving them a certain remoteness and edge. Marsalis played “Delfeayo’s Dilemma” as a bop tune, like Art Blakey’s Jazz Messengers with whom he served his apprenticeship, but Wooley is less forthright, with Eisenstadt switching between accompaniment and pulse, and the solos having more rhythmic flexibility.

I sense no irony in the album, as the review in the New York Times suggested: there’s nothing tongue-in-cheek or style-conscious about what’s going on here, and those expecting some kind of free jazz riposte to “Jazz at the Lincoln Center” will be disappointed. Integrating a certain abstraction and angularity into the band’s performance of Marsalis’ compositions is simply a mode of interpretation, addressing them in the quintet’s own terms, with respect for the originals. Marsalis’ rendition of “Blues”, for example, is a duet between walking bass and trumpet. Wooley’s version is also a duet, but shorter and with a more condensed melody and a free form bass.

But there is humour of sorts: the album opens with “Hesitation”, and the brisk stop – start phrases of the Monkish tune are followed by a long sustained chord from Wooley and Sinton, a slightly embarrassing fermata, not to close the number but shortly after starting, as if undecided where to go next …before launching into the theme again, this time with bass and drums. The tune’s reprised at the end of the album, and the head-scratching chord has gone, only to reappear as the piece evolves into “Post-Hesitation” with repeated chimes on vibes, the melody reduced to soft phrases on trumpet and bass clarinet, turning the previous procrastination into something more positive.

(Dance To) the Early Music is not a nostalgia trip but a reconsideration of Marsalis’ compositions from a different perspective. Wooley’s admiration for the music is apparent throughout.

The album is available on CD. You can buy the album from the Downtown Music Gallery and Instant Jazz.

Marsalis with “Hesitation” from 1983:

Thanks Martin and Colin for this great review. And I also don't hear any 'tongue in cheek' intentions.

Agreed, this is a really great review, Martin and Colin. I didn't hear any jokiness or irony, either, and I wonder if anybody would have mentioned it were it not for MOPDTK's Blue.

Like Wooley (I think we're about the same age), I was blown away by those early Marsalis albums. And revisiting them after this album came out, I was still impressed with the fiery playing. But I felt like Wooley was really pushing himself on this one, almost questioning why he thought those albums were good, to begin with.

Anyway, it's a shame there has to be an "establishment" of any kind, because I'd love to hear these two go at it with a double-quintet!