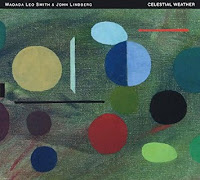 A duo album from Wadada Leo Smith and John Lindberg has been a long time coming. The trumpeter and bassist have collaborated on dozens of albums, beginning with recordings under Braxton’s direction, and continuing through to recent albums with Smith’s Great Lakes Quartet, Golden Quartet and Quintet, and Organic ensembles. Sprinkled between these bigger ensemble recordings, Smith has put together an impressive string of duo albums, in trumpet-drums and trumpet-piano settings. And we were really due for an album like Celestial Weather from these two giants.


The album’s divided into three sections: “Malachi Favors Maghostut - A Monarch of Creative Music (Parts 1 & 2)”, “Celestial Weather Suite (Cyclone / Hurricane / Icy Fog / Typhoon / Tornado)”, and “Feathers and Earth (Parts 1 & 2).” The first section is credited to Smith, the last to Lindberg, and the centerpiece improvisation is credited to both. Let me put it out there right away, this is a truly beautiful album.

Smith and Lindberg have played together for decades, and they each freely lead and follow, in equal measure. As I recall, it’s Lindberg you hear first on Smith’s seminal Ten Freedom Summers album. That’s how integral they are to one each other’s work. The rich balance of sound produced is truly collaborative, and the two friends prompt each other through a duet pushes each into the further ranges of their instruments.

The Smith-composed tribute, “Malachi Favors Maghostut,” is presented in two parts. The opening of the first part finds Smith and Lindberg almost sliding into place. Smith plays an opening melody I’d love to hear in a Golden Quartet setting sometime. Here, without the drums and piano, Lindberg carries the rhythm of the piece forward to its improvised center. I want to say this almost feels like a nostalgia-tinged celebration of the late bassist, the playing from both is lively, with a punching, Lester Bowie-esque solo from Smith. “Part 2” opens in an elegiac mode, with a brief solo from Lindberg leading to Smith playing a solemn ode in clear tones. The bass lines subtly recall Favors’s little-heard solo album, The Natural and the Spiritual, with Lindberg walking along behind Smith, transitioning to the piece’s urgent final section. Lindberg plays a lovely bowed sequence, improvising around a recurring motif, and takes another solo turn, until Smith returns and both push themselves high into the upper range of each instrument. Lindberg closes the tune with three strident, bowed notes, representing each of Favors’s names, or perhaps each of the musicians, or something else entirely.

But, oh!, the “Celestial Weather Suite” is a free improvisatory masterpiece.

“Hurricane” comes to a still center with Lindberg taking a relatively calm solo. After about a minute, he brings Smith back into the maelstrom, urging him into a crisp duet. The brief interplay leads to a Smith solo turn. An angular duet follows, with the two playing contrasting lines, Smith again high and clear, Lindberg displaying a light touch with a staccato bowed run that transforms into a buzzing wind. This is followed by “Icy Flow,” a plaintive blast of a piece. Lindberg plays a searching, chilly solo, before Smith joins him on muted trumpet. The tone of the title is acutely rendered here, with Smith’s lines maintaining the mood throughout.

On “Typhoon,” Smith is again on muted trumpet, this time gently moving through a bright, high line that closes on a muted variation on his typical high blast. The result is unexpected, leaving the listener near but not quite on a precipice. The duo barely pauses before “Tornado,” which, true to its name, is a whirling dervish of improvisation. Lindberg bows a yearning run, circling around a motif for a couple of minutes before changing over to a quick, urgent movement that takes center stage for a brief moment. Smith gives Lindberg a mellow backing, before bowing out for a brief bass solo. When he comes back, his trademark piercing sound centers the listener again. It’s like a beacon in any Smith recording, a flare sent out that says, “Here I am, just follow me.”

“Feathers and Earth” is split into two parts, which according to Lindberg represent the raptors and the earth itself. It’s the briefest composition of the album, clocking in at around 10 minutes total. “Part 1” floats appropriately, considering it’s the raptor tribute. Lindberg, in particular, provides an improvisatory interpretation of wind, sky, sun, and flight. About halfway, he and Smith intertwine their lines in a kind of upward spiral that finally drifts down into some of the lowest registers on the album. “Part 2” blasts the contemplative mood of “Part 1” wide open. Smith and Lindberg each play a modified echo of the striding melody, then transition into a fierce duet that proceeds unbroken for a couple of minutes before abruptly ending on Smith’s final, unaccompanied notes.
Paul on Friday, January 29, 2016
Share